M1 and W1 raced the 2.1km X-Press Head course in preparation for the upcoming June Eights Regatta (JER). Here’s how they got on:

“Did you hear creaking?”

Never a good phrase to hear in a boat. Especially in a boat which is minutes away from racing. “I think my rigger was creaking on the way up” said Maddy, shaking her blade once we pulled in. Rattling is also not a good thing to hear in a boat.

Thankfully, David was on hand to save the day. A quick jog to grab supplies and a cheeky seat swap with Maddy saw him leaning out over the Cam to change a bottom knut in situ while the rest of the crew leaned into the bank to keep it from submerging.
Despite our creaky start, the race itself was strong and steady, like the tortoise who beat the hare. But faster. Having never rowed together in this combination, it was vital to maintain clean technique rather than lose our heads to the pounding adrenaline. And that we did. From bow I had the honour of seeing everyone’s blades and I can say with utmost confidence that it really was a beautiful row.

And the beauty paid off. W1.5 flew down the course with elegance and secured a respectable time exactly in between the W1s and the W2s. I’m filled with confidence that this elegance will serve us well in JER and “bump” us up through the W1 ranks. 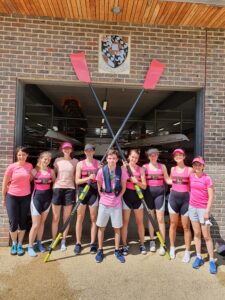 Last Saturday M1 raced XPress head, a 2.1km head race along the Bumps course in beautiful sunshine and calm water. We had an excellent race and we won pots as the fastest crew in the second May Bumps division, as well as being the third fastest crew overall.

We impressed during our warmup with our faultless roll-ups and tap spins. At the start line we bantered with our old foe LMBC M2 who started behind us, but in the race we pushed them out of sight from the first two corners.

Our race plan was bold! We flew out of the blocks as if it were a 1km sprint. Out of each corner we brought the rate up with a big push. By halfway, most of the crew were redlining, and our noisy American six seat barely had the energy to scream “YEAH BOYS” down the reach.

We kept going because now we were closing in on Christ’s. Kieran called our finishing move under the railway bridge, “the ballistic”, and we held on for the final 500. It felt like the perfect race and the results confirmed that feeling. We bought a big box of corona to celebrate and headed to the park.

This was my last race in Churchill colours after 4 years. It was one of the best, but I’ve had so many other great races such as Head of the River, Peterborough and Bedford regattas, and of course every day of Bumps. The boat club has been the best thing about my Cambridge experience, so I’d like to thank all of my crew and club mates as well as the alumni who continue to support the club! 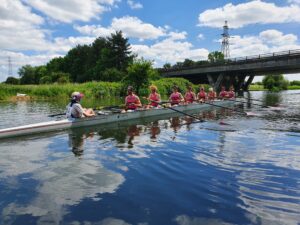