Churchill M1 travelled north to the Peterborough Spring Regatta for their first off-Cam race in more than a year. Eager for side-by-side racing on a proper rowing lake, the crew departed from Cambridge early on Sunday morning. While the 8+ was the day’s focus, M1 split into two scratch crews to race 4+’s in the morning divisions. Having rowed in the 8+ for most of the term, the 4+’s were bonus races and helped the crew to get a feel for the 1 kilometre racing course. In the first race of the day, “Blood, Toil, Tears, Sweat” had a rousing start and hard battle down the course, earning a berth in the B Final. “Leys” were admittedly scrappy off the line and only hit their stride halfway down the racing course, still earning a spot in the C Final. A few hours later in the C Final, “Leys” were able to shave 5 seconds off their time trial result, placing 2nd. In the B Final, “Blood, Toil, Tears, Sweat” matched their results from the time trial, ultimately placing 4th. Satisfied with their results from the 4+’s, M1 gained a lot of confidence in their ability to race the more familiar 8+ in the afternoon. 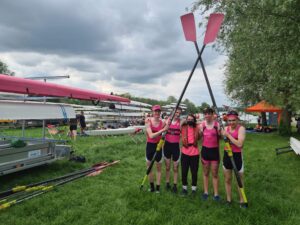 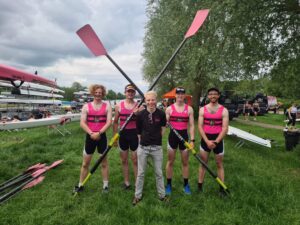 With two races under their belts, M1 spent the next few hours rigging boats, resting their legs, and enjoying their first summer regatta together. As the afternoon came around, the attention shifted to the 8+ and the excitement began to build. The warm-up paddle to the stake boats was focused and deliberate. Confident on the starting line, the crew executed one of their smoothest starts to date and were quickly up to speed. Bombing down the course, the cox had the crew settle into a rhythm as they passed 250 metres. Everything clicked and the crew moved together beautifully, allowing each to push with as much force as they could muster. At the halfway point, power calls saw the crew commit to the leg drive and pushed the boat ever closer to the finish. With boats in contact as the crew reached 750 metres, the cox gave the much-anticipated BALLISTIC call, driving the rate up and surging the boat forward. As the boat crossed the finish line, smiles could be seen on exhausted faces. As the time trial results came in, M1 saw that they earned a spot in the B Final with a time of 3:09 over 1 kilometre, the quickest result that the Churchill Men have seen in recent years. Buzzing with energy from their success in the time trial, the crew prepared for their fourth and final race of the day.

At the start line of the 8+ B Final, M1 were prepared to empty the tank over the racing course. As the starter shouted “GO,” the crew jumped off the line and brought the rate up once more. Speeding down the course, the crew held their rivals for 300 metres, swapping places with nearby boats. Fully committed to the success of the crew, everyone put forward their maximum effort. The signs of a full day of racing were beginning to show as the crew neared 750 metres, but some motivational calls from the cox and some technical pointers helped the crew to reset and cross the line sitting tall and pushing with all the energy they had left, ultimately placing 4th in the B Final.

M1 enjoyed an incredible day racing in Peterborough with six total races and many admirable results. The crew were happy to see that their hard work paid off with fast times, hard racing, and boats that moved together nicely. The crew would like to thank everyone who came along to help the day run smoothly. M1 are looking forward head racing on the Cam this coming weekend! 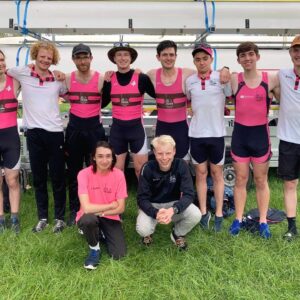 For most of W1, Peterborough was our first experience of multi-lane racing and for Alice and Sarah in bow pair, their first time off the Cam. We turned up in the afternoon with the initial goal of qualifying for our A final. We quickly rigged and went for a quick pre-paddle on the Nene to warm up before our qualifying time trial. Our practice starts on the way down to the start felt good, if a little tense from excitement.

Despite Katie’s best efforts, we managed to dock onto the start boat and were set off for our time trial. Our start wasn’t as clean as we’d have liked and this let City drop us by half a length off the start. But we clung on and didn’t let them push out any further ahead. By the halfway point, there was clear water between us and the boats in 3rd and 4th and we finished comfortably in 2nd, only a couple of seconds behind City in a time of 3:56. This time qualified us for our A final and we paddled back to the pontoons, very pleased with our effort and now aiming to sharpen our start and win our final.

We had a couple of hours to kill before our final so got to relax with a lot of food (and made a new four-legged friend called Bacco). It was also great to see M1 racing in their 8+ final as we had missed their earlier races. Then it was our turn to go again. We headed down to the start, determined to do as well as we could. Our start was a lot cleaner this time around but the other three crews had more powerful starts and we found ourselves down off the start again. Undeterred by this as we knew we could hold a good pace for the whole 1K, we pushed through Leeds into third in the first 500m while keeping contact with City and Globe. We then made a series of moves to try and get back into contention with City and Globe, but they were able to keep ahead going into the last 250m. Leeds then made a sudden comeback in the last 100m and we ended up finishing in joint 3rd with them. All in all a good day’s racing and a fantastic return to off Cam racing and regattas after the last 18 months of disruption! 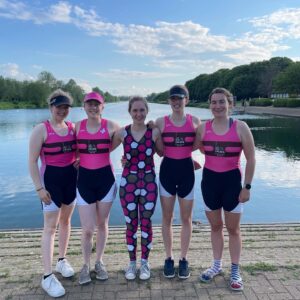