This week six Churchill crews will be racing in the June Eights Regatta (a 4 day replacement for May Bumps). To allocate the crews into divisions and seed them for subsequent races, all crews took part in a 1km time trial from the reach to Bumps Bottom Finish. Here’s how they got on:

Today was the first taste of racing for many in the NW2 crew. Having picked up rowing in Michaelmas they had 4 weeks of training, before COVID locked the boat bay doors again until late March. Over the course of the Easter Vacation and Easter term however, NW2 relearnt their craft and trained with the singular focus of performing at the (bumps replacement) June Eights Regatta. While the 2 weeks leading up to the regatta itself were interrupted by exam commitments the crew was well prepared going into the 5 day racing competition.

The crew arrived for their ‘Getting on Race’ time trial to see the boathouse already alive with crews. Churchill had 3 crews in the 4th division of the day and Selwyn had 2, meaning space on the slip was at a premium. Eventually, finding a slot to launch the boat, NW2 pushed off and rowed on, down the now familiar stretch of the reach to the novice marshalling. There was a customary delay at this point which left time for coxswain George to entertain the crew by playing Queen down the cox’s speakers before finally moving on and marshalling for the race itself behind the senior crews.

As the second last crew of the day we had time to relax and settle before pushing off but before long it was our turn. Winding over 5 strokes we upped the rate to our race target and pushed through the start line, onto the reach. The crew moved with determination up the reach battling hard to get as much from each push as possible. As we passed under the railway bridge a pre planned call of ‘Up 2’ was given by the cox. And the crew answered, giving a final surge to increase the pace across the line.

The effort from the crew was huge and exhaustion was spread throughout all 8 faces at the end of the race. An unofficial time of 4:13 (from a bank party’s watch) places us in the NW2 division, and we race again tomorrow against Selwyn NW2. Let the side-by-side racing begin. 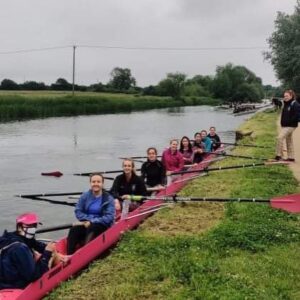 Today NM1 made their race debut for the June eights regatta getting on race, in the gloom and drizzle of this beautiful Sunday. The day got off to a rocky start with a last-minute injury and sub, but the crew stayed calm, and after much footplate shuffling, we pushed off into traffic jam Cam. On the row down, we lived up to our ‘splashy but effective’ style with some practice rolling starts, then were quickly marshalled down the reach, spun and headed for the start line.

We rolled over the start line with our usual high rate enthusiasm, and David began everyone’s favourite call to lengthen the stroke. Then, for the first time ever, we relaxed into the row and put down some good long strokes.

We built on our fast start and made some rapid progress down the reach; with a call from Alice that we were over halfway and further motivational calls from bank parties on both sides (thanks, guys), the boys in the Canon continued to eat up the meters. We dug deep as we crossed under the railway bridge and turned the power on once again. We pushed off the bridge with screams from both inside and outside the boat and did some of our best and fastest rowing as we powered towards and then crossed the line. Happy coach and happy crew!!

Big shoutouts to Jude, our amazing emergency sub, Alice, our excellent coach for finding the aforementioned sub, our lovely bank party Katie, and our wounded hero Moose cheering us on. The boys are fired up and ready for the next four days of painting the river pink. 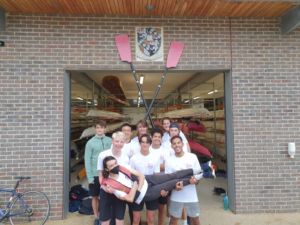 NW1 set out on our first day of racing with one noble goal: to force me to deliver on my promise that if we win June Eights Regatta, they can dye my beard pink. A hair dyeing session the night before saw much of the crew sporting pink hair, and we were equipped with pink scrunchies and long bright pink socks for some easy free speed. Needless to say, we were prepared (to look good whatever the outcome of the race). The marshalling process, while chaotic and slightly stressful for me, was made extremely exciting by our discovery of a courgette and pineapple just floating in the Cam, which we promptly fished out onto our blades and held onto until we had to row on. This was probably the highlight of my day.

As we got ready to race, the focus was on staying calm and relaxed. We headed around Ditton and wound it up, beginning the race powerfully and slightly exceeding our target rate. After our previous outings, it seemed pretty clear to me that we would do very well provided that (a) I didn’t crash the boat, and (b) nobody caught a crab. Neither of these things happened (although on the crab front there were a couple of close calls that were very well rescued), and so we made pretty good time. Spurred on by our lovely bank party of Sarah and Hei Li, and with the bursts of power granted by the Tom Upton ‘Step Up’ move, we zoomed up the river. After about 3 minutes and 46 seconds of me saying ‘square early’ repeatedly we crossed the finish line, successfully making the NW1 division. Exhausted but proud of ourselves, we happily made our way back to the boathouse. Hopefully, this is the beginning of great things for us! Big thanks to everyone involved <3. 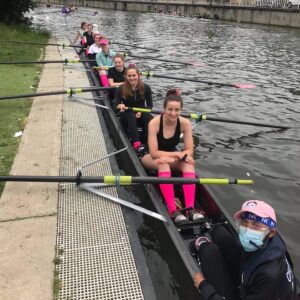 The boat arrived at the marshaling point. A single ray of sunshine forced its way through the clouds to illuminate Churchill M2, careful not to spread any light on the neighboring Downing boat. The chosen ones had arrived. Hushed murmuring could be heard throughout the other boats.

The Umpire cautiously addressed the boat, intimidated to even look at Hei Li, the cox of legend. “Churchill, you may row on.” Hei Li’s smooth baritone rang out across the river as other coxes watched in envy. Churchill M2 began our rolling start in fantastic form, only shaking the boat a little bit, under the calm guidance of Hei Li. As we settled into our rolling start at rate 36 we approached the speed of sound and breaking the sound barrier would be a safety hazard for the swans and the other crews, so Hei Li had us drop the rate down to 32. At least, that is why I assume he had us drop the rate.

We continued at a smooth rate 32 for the next 700m, demonstrating phenomenal fitness and form, until we crossed the motorway bridge and the “FOOTPLATES” call rang out in that angelic baritone that seemed to come from the heavens. M2 dug deep and pushed themselves across the final 300m, for a final split of 1:50. 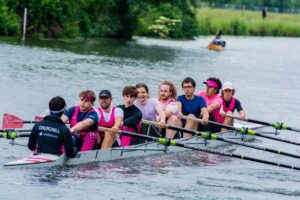 We arrived to a busy boathouse and managed to get our boat out between the other crews racing in our division, including our M1 and M2. After a quick chat through the race plan, we hoped on the water, ready to go! Due to other commitments, this was our first time rowing together as this crew, but throughout the row down the set and rhythm felt secure and relaxed. Marshalling was an interesting experience with a boat parked in the gut, but Danny our cox skilfully pulled us up to where we were supposed to park. After tightening our riggers (Alice had heard an unwanted clicking noise on the row up), stretching our legs, and having a final talk with our coach, David, we pushed off.

We tapped it along the river past the Plough, a turned the corner, straightening up before we began our rolling start. A classic build 3, wind 5 and we were off across the start line. The first half of the 1k course felt strong and through a few power four calls from Danny, we could feel the surge increase on the boat. The set was consistent and one of the best it had been all term, allowing us to row without fighting with our blades in the recovery. Pushing of the railway bridge, before we knew it we were across the finish line!

It was a strong race for a new crew, giving us all an experience we can learn from for the next four days of racing. We are racing First and Third W1 tomorrow in the SW2 division, a crew that we bumped in Lent 2020 – hopefully it will be a fun and exciting race! 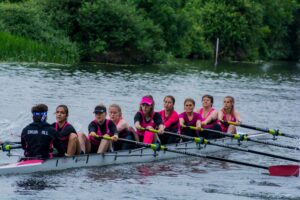 M1 pushed off early to get some extra time to build up the hype. We paddled to Jesus Lock and back, feeling nice and chunky. After a quick stop back at the boathouse to stretch, we rowed to the Motorway Bridge and had a practice start along the way. The start felt powerful, although maybe not the most set. Unflustered, we then span, pulled in, and got out of the boat for a final crew chat. The hype was at its peak, but we still had to wait in the cold for what felt like half an hour.

Finally, once all the other boats were in position, we got back into our boat, focused in, and pushed off behind Caius M1.

This rolling start felt powerful. We hit rate 36 and (for the most part) kept it there. It felt controlled and relaxed, yet chunky in the water. The boat was a stable platform, which allowed us to display our finest technique and to pull as if we were on an erg. We went all out on Kieran’s BALLISTIC call, and finished in pain, happy with our performance.

We matched our quickest 1k split on the Cam despite a significant stream against us from all the rain in recent days. The results were enough to earn us one of the 16 spots in the Senior Men’s First Division. M1 are proud and we are looking forwards to the next few days of racing! 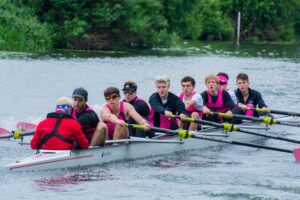