Churchill M1 made the most of the summer weather over the bank holiday weekend by spending over four hours on the water for the “slightly longer than anticipated” Nines Spring Regatta. After a silky row down to the top of the Reach, which showcased some of the finest paddling of the term thus far, it was time for the first race of the day.

M1 nimbly lined up at the start against a big Sidney Sussex boat. Attention. GO! The crew were off to a scrappy start and Sidney took the lead. Once we had shaken off our less-than-clean start and settled into a rhythm, we held Sidney until the end of the race; but they had taken too much at the start for us to reel them back in over the short 1 km course.

Having been knocked out of the upper bracket, we were granted a row over semi-final due to the presence of an odd number of crews, which advanced us directly into the plate final. This time we lined up against Wolfson. Attention. GO! With a clean race start we had a beautiful race up the Reach. Wolfson went about six seats up at 500 m, but some great BALLISTIC calls from the cox and roaring from the bank had us pick up the rate up to 38 and kept us in the race. It was neck and neck right up to the finish line, with Wolfson sadly winning by less than two seats in the end.

In summary, a great day for rowing on the Cam, with Churchill M1 providing great races to watch, with hopefully better results to come. 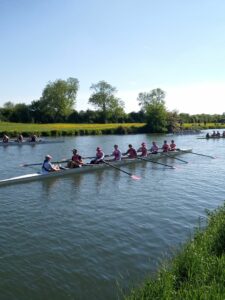 After only one slightly rocky practice outing two days before, the M2/W2 mixed crew set off for the Spring Regatta with lots of energy, but little expectations. It was 12:30, on the warmest and sunniest day we’d ever seen in Cambridge. We had a quick look at our competition while we rowed up and waited, and got a good, although very high rate, practice start up the reach.

Up first we were racing X-Press boat club’s “Xpress yourself”, a crew with a mix of experience and a higher average age. We didn’t know what to expect. Hei Li reminded us to ‘keep it relaaaxed’ as he straightened up on the tow path side. Attention… and we were off! Our start was everything but relaxed as we sped off the start line, however it was clean and we immediately pushed away the opponents. Hei Li called each seat we passed as we widened the gap, rating well over 30. They held us for little while, but soon were far in the distance. Once in clear waters, the crew was able to relax more and got into a solid rhythm, encouraged by our coach Christian on the bank. The second half of the race was a happy piece to victory.

Onto the final! On our row up the set was better than ever. Clare Hall looked confident, but so did we. Hei Li was overjoyed to row on tow path side: “we’ve got this”, just the same again. Attention… go! We hadn’t finished our first three build strokes that Clare Hall steered into us, causing Maddy in stroke to hit the bow of their boat! This led to a moment of chaotic timing and confusion in the boat, but Hei Li kept his calm, reset the crew, and not only did we get back in time, we were able to find a relaxed rhythm much earlier than in the first race. The clash had destabilised Clare Hall too, and halfway down the reach we were already getting a length of clear water between us. The rest of the race was some of the best rowing we’d done together. Hei Li pushed us on till the end, and it was victory again.

What a beautiful day on the cam and first racing experience for Hadley, a recently ex-novice in the boat!