CCBC was quickly back in action again, with crews taking part in City of Cambridge’s Spring Head to Head and City Sprints events across the May Bank holiday weekend. Here’s how they got on:

A scratch M1/M2 composite set off on Saturday for a double-header 1.9k race up and down the Cam. After a short marshal at the P&E, the crew set off as the head of the 3rd Division. Building the rate up as the crew passed under Railway Bridge, the focus was on keeping solid technique. As the race continued, the crew pushed on through 1k, despite a blustering headwind and finished strong. Satisfied with a solid performance, the crew spun and prepared for the second leg.

The second race started just as well as first, the rate building up across the line. With a tailwind, the crew focused on keeping the slide relaxed and keeping the rhythm smooth. With some motivational calls from the bank with 500m to go, the crew pushed over the line, ten seconds faster than the first leg. The crew were the only Senior Men’s boat to negative split the two legs the race, a testament to their ability to pace. 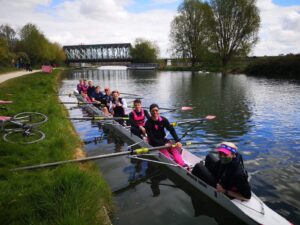 Finally the news everyone has been waiting for… the first novice race of the year (#ThanksCoronavirus). With only 6 weeks of actual rowing in the 6 months since they started their rowing careers, they were lining up against a mixed senior crew from Hughes Hall.

This opportunity to race would be just reward for the commitment of the novices that had been around over the Easter Vacation and were hyped to prove their metal in the water. In the run up to the race, they had a week of training together as a set crew, receiving a crash course in high rate rowing and start sequences from our seasoned alumnus Thomas Upton (who led NW1 to repeated victory last year).

The crew was focused from the outset, putting some senior crews on the river to shame. The crew rolled up to the start still awaiting to hear the handicap that Hughes Hall (as seniors) would be given, and despite Rowan’s commitment to the cause and best efforts in persuading the umpires, only 8 seconds were given. But this didn’t phase the crew in the slightest, who were keen to set a good time for themselves and hopefully have some fun.

Building from a good clean start, the crew didn’t let themselves get overwhelmed by the first taste of competition on the water as they held the rate at 32 for the length of the reach. Despite the increasing excitment of their coaches on the bank as the prospect of rowing the 500m in sub 2 mins arose, they managed to keep their cool even as Hughes Hall came barreling down upon them, to row their (crab-free) race. They crossed the line with an unoffical time of 1:58 and impressing Hughes Hall in the process.

This has been a culmination of the 6 weeks of training for these novices and some will now progress to senior crews. It also acts as the starting gun for Novice Term v2 for the LBCs as they get them ready for being seniors by the end of the year.

Kieran and Chris,
Coaches and LBCs 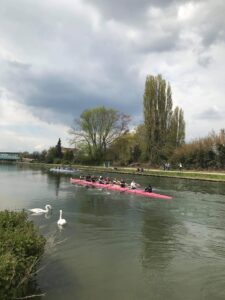 The day after Head-to-Head, Churchill M1 were one of only four colleges to enter in the Senior Men’s Division. After a clean warm up and a few practice starts the crew sized up their opposition, Jesus M1. The start went well, and the crew wound the rate up to 40 before settling down to 38. Despite pulling their fastest 500m to date, the crew finished half a length down on Jesus and were knocked out. However, Jesus went on to win the event in the next round by open water against their opponent, which softened the sting of defeat, but only slightly. The crew looks forward to racing on and off the Cam soon.