Last Saturday, 4 (+1/2) Churchill crews were out racing on the cam at Winter Head, a ~2.5k course from Newnham Bridge to Stourbridge Common. Chughes (Chu + Hughes Hall) returned, alongside 2 senior women’s, and 2 senior men’s VIIIs. Here are the race reports! 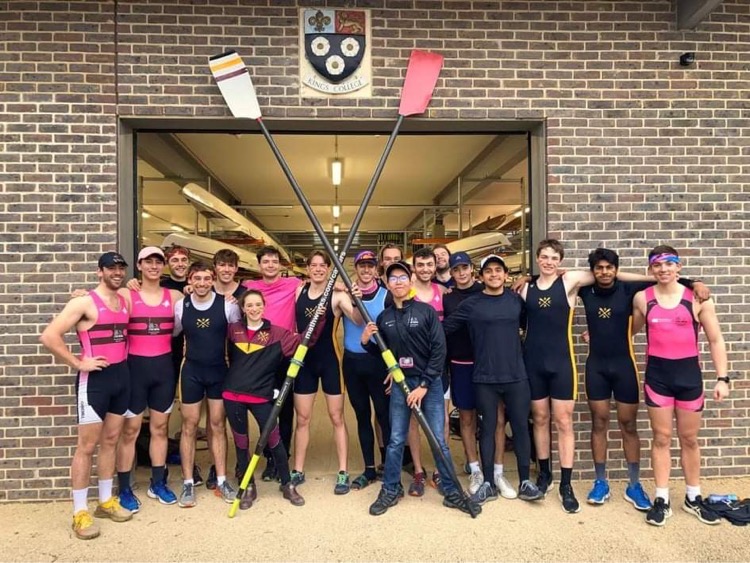 The week before Winter Head saw W1 tackle various challenges, from the introduction of the two-boat rule to a sudden injury in our ranks. But we were not that easy to phase, and after a strong build up to Saturday, with the help of our amazing coaches David Sampson and Andy White, as well as Amy who bravely stepped in to complete our crew line up, W1 was ready for our first official race of the term.

On the day of the race, despite a failed attempt by M1 to sabotage Hei Li’s competition focus by luring him into an early spoons sesh, the crew was organised, prepared and high in spirit. Pushing off exactly on time, we rowed up to the motorway bridge with a few practice starts along the way, using every traffic-induced pause to scare our opponents with immaculate tapping and flawless roll ups. As we reached our marshaling spot, jelly babies and star bursts were promptly distributed to maintain morale and energy levels in the boat.

After some final advice from the bank and some speedy de-kitting, we jumped into action, producing a sharp start with a solid rate and leaving Fitz W1 in the dust behind us. At first, we steadily gained on Claire W1 in front – this wasn’t a bumps race but there is no harm in extra practice 🙂 – but when the initial excitement wore off about half way through the race, we realized we were no longer getting closer, as the rate started to creep up and the power dropped a bit. But our opponents would be foolish to think this could stop us from pushing on that footplate and delivering a decent performance in the second half of the course – neither did it stop Hei Li, who was with us through it all, motivating the squad with his powerful calls and bringing the boat closer to the finish line with each clean and tight corner. Never letting Clare slip out of sight, we pushed Shall We Fly all the way to the finish line.

While we didn’t continue the streak of overtakes started by our men, we came 11th out of 26 first women’s eights, beating a multitude of crews, including our on-course rivals Clare W1 who ended up 12 seconds slower than us. There is a lot to be learned from this race as we build up our competition experience but it was a solid performance from a confident, powerful crew that I as captain could not be more proud of! We would like to thank our coaches David and Andy, our sub Amy (without whom we would not even be racing), our wonderful bank parties that kept our spirits high, and everyone who has subbed into W1 so far this term! 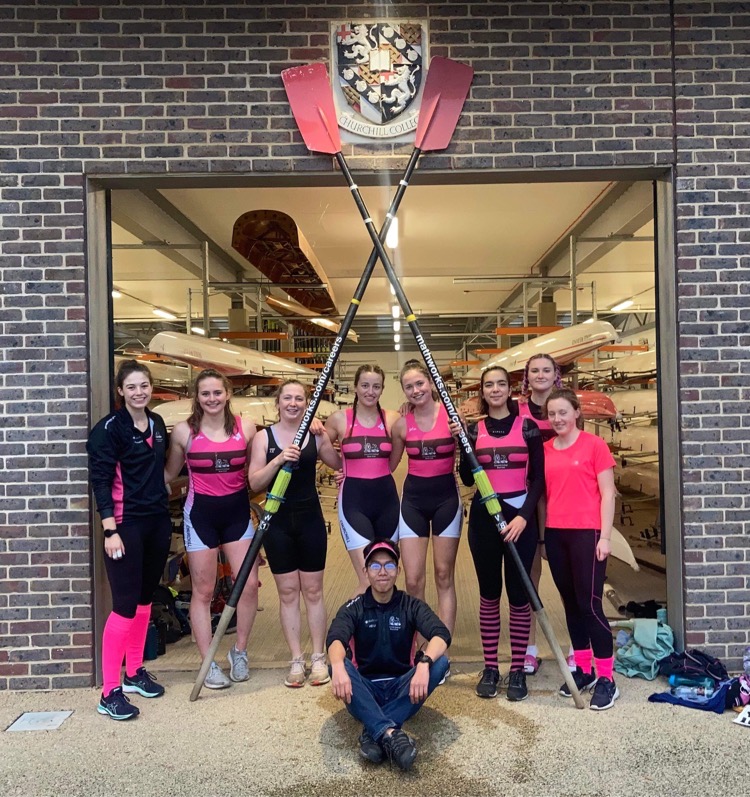 Cantab’s Winter Head was the first race outing of the academic year for the Churchill Chunkies and with it came the first chance to measure themselves against other M1 crews on the river. There were many new faces in the crew, with only two returning rowers from last year’s May board and two rookies swept straight up from the ever popular Summer Rowing program. However, six weeks of consistent training had led to huge improvements on the erg and on the water for Churchill M1 and they were keen to announce themselves on the Cam.

The crew raced in the first division leading to an unusually early weekend start before marshalling between St. George’s Hospital M1 and Selwyn M1. The well versed start of 2 draws and 5 winds had the boys quickly settled into the race pace of 33 strokes per minute and it quickly became apparent that the expert coxing of Hei Li (borrowed from W1 for the morning) would be necessary as the crew passed St. George’s Hospital on the top of Plough Reach, whipping across them into Ditton corner in a perfectly executed move.

When moving up the Long Reach and toward the finish line, Selwyn M1 began to move up on the stern of Shall We Dance and the last 500m changed from a head race to a side-by-side regatta and the two crews went the distant from the railway bridge to the P&E with overlap. The hectic and frantic conditions proved to be the undoing of the crew with the lungs and legs burning Selwyn finished just under a length up. Well done to Selwyn, we were glad to see our neighbours in the CCBH finishing third overall and beating some of the more established names on the river. They won this one but we had a stronger showing at spoons after!

Overall the crew was well pleased with the outcome, sticking to the target split throughout and finishing as the 11th fastest M1 crew – comfortably beating a few of our neighbours in the Lent and May Bumps charts. More is to come from the Churchill Chunkies and next up is Fairbairns! Special thanks also goes to Hughes Hall Boat Club’s Indigo for agreeing to sub into Churchill M1 with 12 hours notice – his first race of three that day!

Despite a less than ideal ‘dress rehearsal’ the day before the race (good old Jack was out of commission and we had to have our last outing before the race in the Canon – almost no one managed to stay in their shoes during that outing…), we were all in high spirits on Saturday – well prepared by our amazing coaches (Yeah Kathryn and Tom!). After an excellent parallel park manoeuvre on the crowded Cam (Yeah George!), we geared up with some 80s style aerobics in the boat (YEAH GEORGE!). Ready to fly, we were at full focus once the race started.  After a wind up to 60 (!!!) (Yeah Elre!!!) – (ok, apparently the box broke so we are quite sure the 60 might have been a miscount), we raced on at a solid 32/33. Mid race the microphone broke for bow four who thereafter rowed by sight and ambient sounds of the cheering crowds alone (Yeah Bow 4!!!). Despite these minor tech issues, our rowing was solid (‘chunky’ even? J ): Jack was set like never before (Yeah Jack!), we aced the corners and ploughed on (well past the Plough). Although the 2.5 km did test our fitness (which we trusted!), we were carried by the cheering of our excellent bank party (Yeah Camille and Tom!) and confidently raced to the finish line; giving it our all when George called the ‘finish line in sight’ right under the railway bridge. Those last several hundred meters did feel loooong, but we made it in stride and landed solid mid field of our division (11th out of 22) (Yeah Churchill!), with George treating us (and the Saturday-strollers along the Cam) to a performance of Bob Dylan on the row back to the boathouse 🙂 – What a day! Yeah W2!!! Well done everyone!  🙂 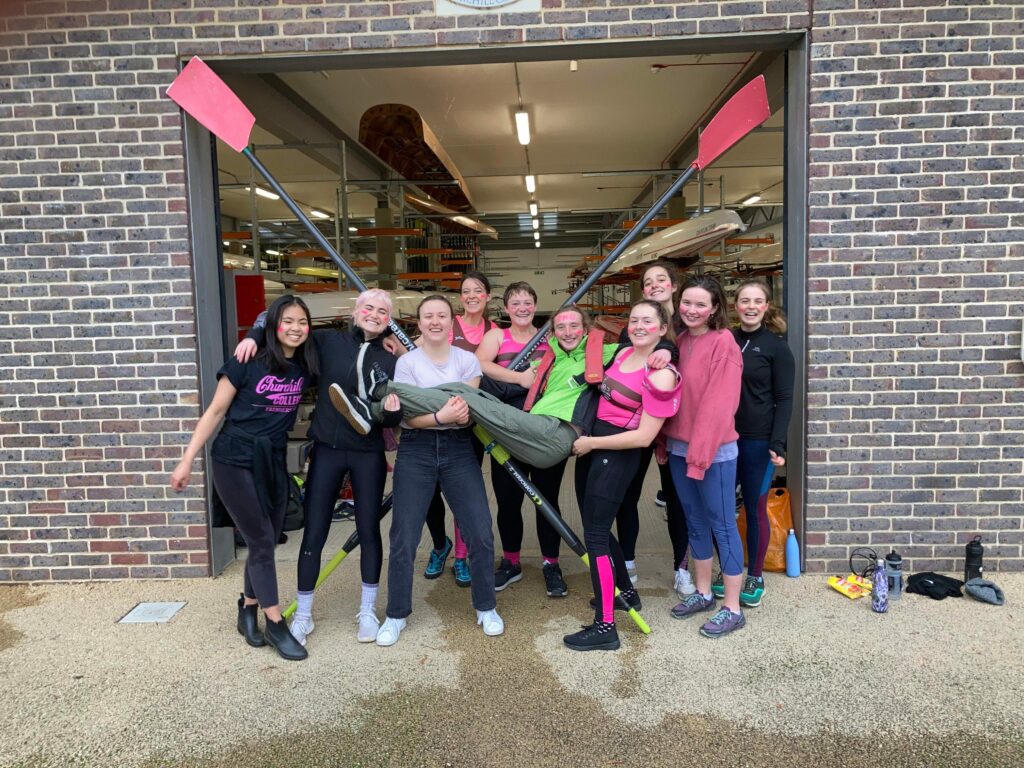 The week before the race the boat lineup was altered due to bowman needing to self-isolate as a covid close contact. Despite not having rowed the past two years Peter Z filled in admirably at bow for our last pre-race outing on Friday and the race the next day.

Race morning began with inspiring exchanges of whatsapp messages to get us hyped up and in short order a race plan was efficiently devised (go fast!) with a goal of sub 10 minutes (9:50).

The boys were in high and confident spirits at the boathouse. Pep talk by Coach Nii Djan focused us right before push-off. Focus and set was indeed excellent on the row down to the start giving us a good boost of confidence right before the start. Fortunately we didn’t have to wait too long in queue. Cox Alex wound us up to go and we were off.

Stroke Ben set a deliciously solid rhythm, cox Alex a beautiful line up the river. I don’t remember a lot at this point. Alex or others please fill in here if you can.

Personally I felt this race was a huge win for all of us as a boat. It’s one thing to share outings and ergs but quite another thing to come together the way we did in a race.

Comments from some of the lads:

2 seat Weiming – who, by the way, has now lost his race virginity ! : “Overall I think we did well yesterday, only a few moments where I felt the boat was not balanced and saw some splashes. For myself 2.5k is much longer than I imagined, and I think more ergs would be definitely helpful.”

3 seat Dom : “My brain just shuts off during the races honestly.”

5 seat Harry : “I had zero active brain cells for that ten minutes.”

6 seat Kieran : “We spent the entire race pushing off King’s in what can only be described as preparation for bumps 🙂 !”

We overtook Christ Church BC (Oxford). They crashed ahead of us at first post corner. But undoubtedly we can take credit for their crash since they must have been terribly intimidated by the brilliant sight of Churchill M2 looming behind them !
Apparently they crashed again later on grassy – we must really have been getting free rent in their heads. Just kidding, it sucks to crash.

Post-race: Nii Djan liked the way we looked (need to work on our fitness) and set words of encouragement and goals for Fairbairns in two weeks. And of course we will not forget the well-loved Nii Djan theorem of rowing: “If there’s a problem it’s not the boat, it’s you guys.”

Thoughts are now tightly focused on the BCD and its aftermath ! 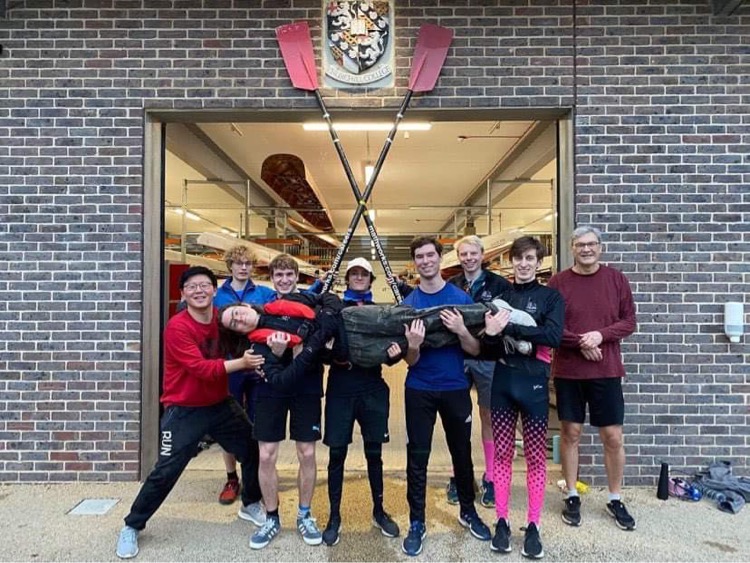 Churchill’s most successful summer transfer (for the bargain cost of the freedom of trying every rigging possible), Indigo, had another ace in his sleeve when the ChuHugh train prepared for Winterhead.

Having dominated in a bucket rigged four over summer, and as champions of the prestigious Sudbury regatta in the battleship rigged mixed and open eights, the ChuHugh superpair rigged pink four was preparing for impact! We were confident that the exotic rig would provide the free speed to compensate for the lactic acid accumulated by each crew member in one (or even two) previous races.

And impact we had. After just two session in the newly assembled multi college crew, in which Thomas the American tank engine was replaced with the more filigree Yizhou from Hughes Hall, we were ready to launch. The superpair was ignited with the infamous “PUMPIT” call by our beloved cox Sam and we immediately started to gain on the Caius eight ahead of us.

At grassy our two man was level with the bow ball of Caius. However, because Caius had to evade a crashed crew we had to take the corner very tightly costing us some momentum. Nevertheless, the overtake was bound to happen when a rapid Jesus M1 decided to undertake us in Ditten corner. The Jesus cox was unfortunately misinformed and took Winterhead for Emma sprints. Now trying to overtake Caius and go wide, Jesus directly took aim for the bank and did literally nothing to avoid head on attacking the beautiful tree at Ditten corner. Having taken up speed and ready to overtake Caius on the reach, we had no other choice than holding up hard and hammering into the stern of the Jesus boat.

After a one minute break we finished the race in style. Only losing by a few seconds the scruffy Magdalene M1 four, in which Daniel had been rowing previously that day.

We are excited to coming back for another race at X-mas head soon. Stay tuned for the next adventure of the ChuHugh train! 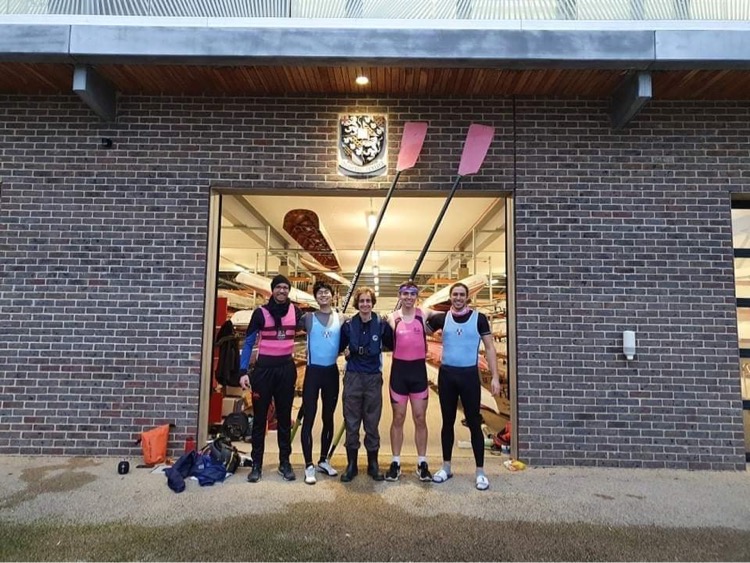 Posted in News and tagged races.