On Sunday, the novices had their first race on the cam – Emma Sprints! 3 crews raced, NW1, NW2 and NM1. Here are the race reports:

Bedecked in pink, covered in facepaint and encouraged by the cheers of a successful NW2, NW1 manoeuvred onto the start line for the first race of our rowing careers: Emma Sprints. Churchill immediately gained ground over Clare in the first few metres, but began to fall behind after several unfortunately timed crabs. Despite this, hard effort from the girls as well as skilful coxing in very windy conditions brought us back to level at the half way point. Oars clashed and Churchill got entangled with Clare, but made the best of the situation and we managed to get it together again quickly to overtake Clare in the final stretch. After this point it was a close call, with Churchill claiming victory by less than a boat’s length.

Spurred on by our first victory, NW1 went on to face Catz in the next round. Unfazed by a crowd of Catz supporters cheering next to us and hoping for us to crash into the bank like the unfortunate boats ahead of us, we set off, making a much better and more coordinated start than in round 1. We successfully held our own against Catz in the first half, but despite our best efforts, Catz pulled ahead in the final stretch and took the victory.

We learnt a lot from our first race and we’re ready to train hard and smash Fairburns! 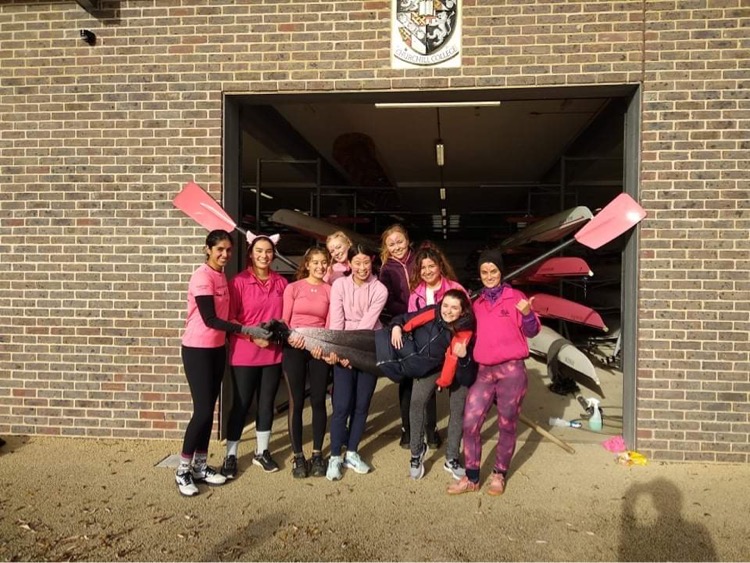 Emma Sprints – first major race for most of our NW2 crew! Our division had drawn the unfortunate time of first races of the day, so we were there at the boathouse 8am on a Sunday morning…I guess we can’t really complain considering the 7am starts on weekdays?! Clad in our Scooby Doo outfits, which for your information were definitely NOT made for the winter chill, we headed out onto the river, all safety-pinned up with our race number ‘107’, and equipped with the all-important Squashies sweet stash for a sugary pick-me-up between races (shout out to Elre!).  Our first race was against Kings, waiting tensed and hearts beating under the Green Dragon Bridge. Churchill NW2 absolutely stormed the first race, leaving our opponents miles behind. The second race against Trinity Hall got off to a slightly more chaotic start with lots of clashing blades, but once again our NW2 girls pulled through, easily crossing the finishing line in first position! The third race against Emma NW3 didn’t begin terribly well as we collided straight into the bank, but we didn’t let that dampen our spirits! The crew made an incredible effort to close the gap, and although we were gaining on Emma, 500m wasn’t quite long enough for us to pip them. Okay, so last race, going for bronze medal position…Churchill NW2 against Emma NM3. With a slight head-start advantage, we waited for the marshall to sound “Go!”, then we were off. The crew pulled hard for our last 500m dash, maintaining the lead all the way and finishing as deserving winners!! Pffft, we didn’t even need the head-start. Overall, despite the cold (I can testify as a cox, I was wearing 2 pairs of socks, gloves and you don’t want to know how many jumper, and was still shivering by the end), a very exciting day and first race experience for most the crew! Massive thanks to Elre, Sarah and Charles for being awesome bank parties, your support and encouragement helped us get through those races! And a special mention to Sarah and Charles for being our elite coat carriers (sorry if you guys got hot cycling with 5 coats on haha). So, Churchill NW2 finishing Emma Sprints in the top 3, not too shabby I’d say. YEAHH CHURCHILL! 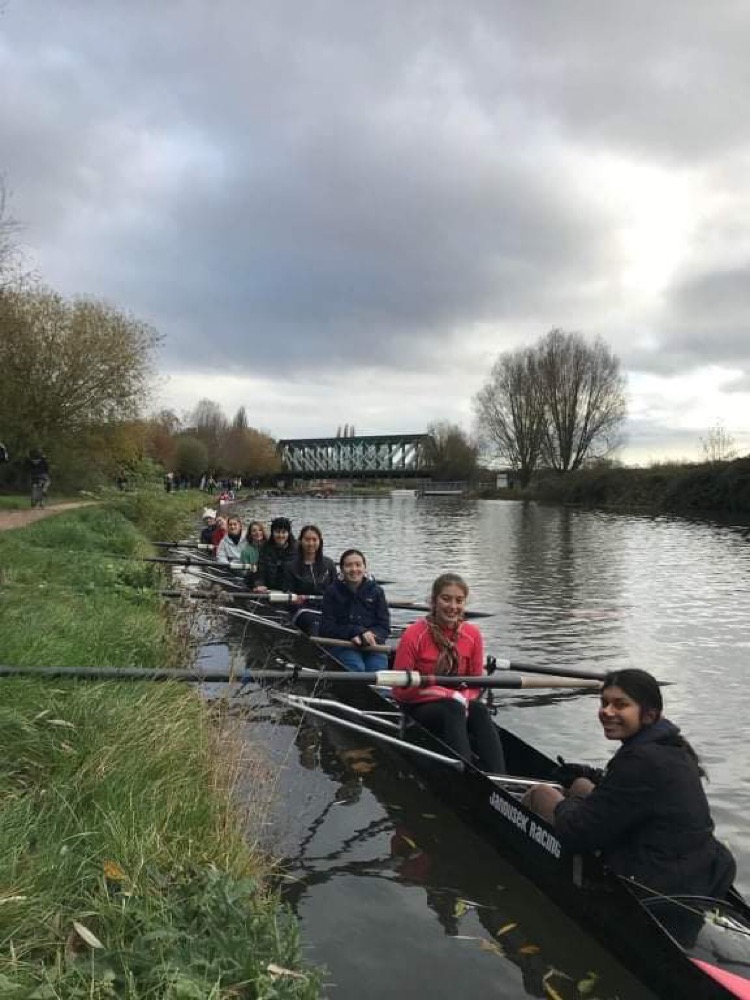 Today was the day, NM1’s first race, Emma sprints. We arrived at the boathouse with our flamingo outfits, eager to get onto the water. Nerves were in the air. Noah, Kieran, and Chris had given each of us many things to think about (backs tall, slow recovery, squaring early etc) and the fear of catching a crab (and being a feature in the 2021 top ten crabs compilation) was a very real one. As we rowed towards the start line the mood was lifted by all the compliments of our costumes, 9 pink flamingos and one luscious pink boat, the ‘Baron’.  We may have been uncertain about how the races would turn out but one thing was clear, we were rowing with the most style.

Our first race was against Homerton. In a completely unfamiliar territory with a chaotic atmosphere, we lined up by the Marshalls, front stops ready, waiting for the call.  Suddenly we hear ‘attention, GO!’ and before we even had time to mentally process it, we were off. After executing 3 good draws disaster struck, the boat under the strong winds had careered into the bank and we came to a complete stop. The race seemed over before it even began. But we aren’t quitters. We pushed off the bank, got to ready positions, and quickly performed our starting maneuver again. The adrenaline was high, rowing at extreme rates in an attempt to make back distance. The recovery was rushed and the timing was off,  there were moments where parts of the boat were rowing completely out of phase with each other, but eventually, we found our rhythm. ‘drawwww, CATCH, drawwww, CATCH’  Zoe shouted, keeping us in time. As the race progressed it was obvious we were the faster of the two boats but alas our efforts were in vain. We did not take the win but we got something even more important, experience. With our first race out of the way, the adrenaline setting down, we collected ourselves. We were disappointed but not defeated. We now had more experience and were keen to start our next race.

Our next race was against Pembroke, we lined up alongside them, and again with  ‘attention, GO’ we were off. We performed our start exactly as planned, and after the first dozen driving strokes we were in our fast but sustainable phase. The technique was much better than the first race, mostly in time, a good recovery to drive ratio and the boat was well set. We maintained this for most of the race but unfortunately at the end of the day, the Pembroke boat was just faster.  Two defeats under our belt, but we were proud. We may have lost the second race but our timing and technique was great, the main problem was the power which is something we can work on. We returned to the boathouse with high spirits, optimistic about future races to come. 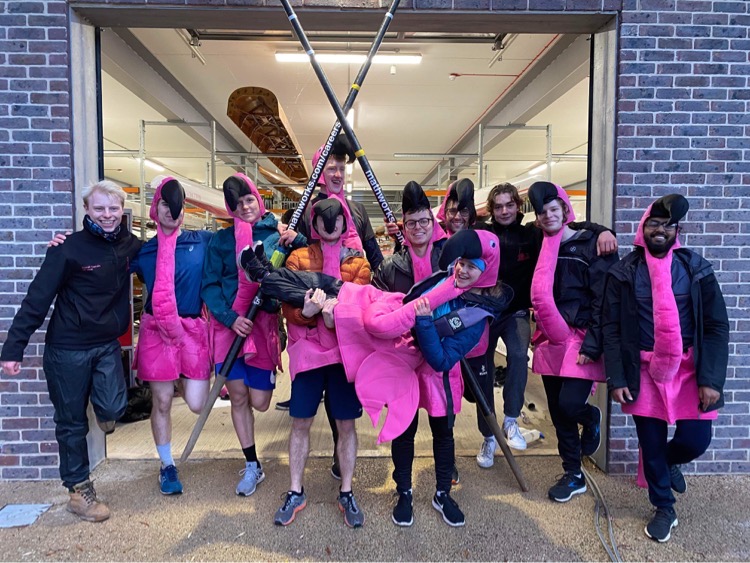 Posted in News and tagged race.