The race reports and results from Sudbury Regatta at the start of August: 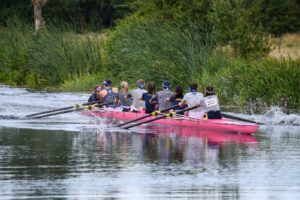 “It follows then as certain as that night succeeds the day, that without a decisive naval force we can do nothing definitive, and with it, everything honourable and glorious.” – George Washington

The quintessential English summer morning of the 7th of August 2021 saw a storm brewing as the USS Imhoff prepared for battle on the open waters of the Sudbury International Regatta’s open 8s+ division. As 9am rolled around it was all hands on deck as Jack Miller was rigged for maximum performance in the now iconic Churchill ‘battleship’ rig,

The impromptu crew formed as a merger of David/Nat/Kieran/Jeremy, who brought the spirit, and the Chu-Chughes 4+, Captain Imhoff/Indigo/Daniel/Chris/Sam, who brought the guns. The prospect of victory wasn’t great as the crew boarded the USS Imhoff only to realize that the shoes were on average four sizes too small. Nevertheless, we pushed off the bank and rehearsed the start sequence together for the first time. What the crew didn’t realise in this moment was that this wasn’t a math test, this was a completely different kind of test, one where passion has a funny way of trumping logic.

Following a long and rainy marshalling process with plenty of comments about the ‘pink boat with the weird rigging’ from the commentators, the start whistle set off the USS Imhoff against an eights crew from Lea’s. Against all odds, the crowd favourite soared down the 350 meter course in a time of 1:04, winning by ¾ of a length. At this point victory was in sight.

An hour later we were back on the river for the final of the open 8s+ division with nothing but the hip flask winner’s prize on our minds. Another 1:04 dash later, the USS Imhoff secured the win over Huntington boat club’s 8 and cemented the legacy of the Churchill College battleship in the history books of the Sudbury International Regatta. 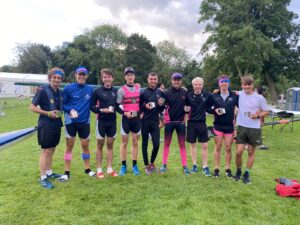 After a strong performance at St Neots two weeks ago, NM1 were back with blades in hand to splash up as much river as possible at Sudbury Regatta. The day got to a positive start, with half of the crew winning two races as part of the 8+; the boys were filled with confidence to bag more silverware. The 650m course was shorter than our preferred races over 1km, but our practice starts had been looking rapid all week, so we took to the water knowing we could give any opponents a run for their money. We lined up next to a very ‘senior’ novice crew, ready to give it everything. We set off to a clean start, if not slightly hampered our opponents’ blades making an appearance in our lane.

They capitalized on this confusion and pushed around the corner ahead of us, but we didn’t let this stop us from chipping into their lead at a strong pace into the straight of the course. Alas, the race result was age before beauty and didn’t catch up over the final 200m. Our slightly smug opponents paddled off and eventually won the competition. NM1 are getting straight back on the Cam to iron out the creases for our final race as a four at Peterborough next week, ready to go out with a bang. 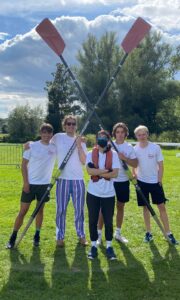 It was a long day – the regatta was running late and the adrenaline from the race six or seven hours past had now subsidised. It was almost hard to believe that we were to boat in a few minutes. This disbelief was aided by the fact that Nat and I had a mere 3 outings in our back pocket in the double. Moreover, both of us were out of sculling practice.

Nevertheless, we persevered. A strong row up, easy maneuvering with minimal strokes around the busy river. We were in the last division and the rowers around us were keen to go home.

Our opponents were from a Kent-based club aplty (their boat was just about the right colour of military green, but they claim it was just a coincidence) named “Spitfire”.

The first moments of our start were as practiced, but the tiredness and fluster had got the best of me and my spoon ended up over-squared in the water. I tried to get back to control but to no avail. We had found ourselves planted firmly in the bank of reeds.

I apologised profusely but Nat reassured that it was all okay. We backed ourselves out and were on our way. Past the regatta field we heard cheers.

Our finish was met with affirmations and encouraging comments. A bit frustrated, we were still in high spirits. After all – not many crews can send a boat with such speed after less than a handful of outings.

We will be back to our usual programming (read: pair) next week at Peterborough. 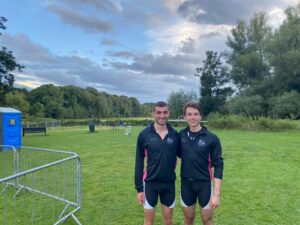 The M1 IV+ gained to a length ahead and were still gaining before an outcrop of of reeds put an end to their pot dreams in their first race.

Shout out to Hughes Hall Boat Club for joining us in the crews for these races! 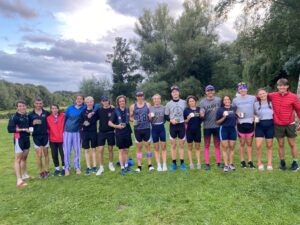