At the end of July a CCBC M1 IV+, an NM1 IV+, and a pair travelled to St Neots Regatta for a couple of days of racing. Alice, a member of W1, also raced with the lightweight development squad in a IV+, VIII+ and a pair, stroking all of them. Here are the race reports from the weekend!

M1:
Churchill M1 combined forces with Hughes Hall M1 (cox and stroke) to race a bow-rigged, bucket 4+ at St. Neot’s Regatta. On Saturday, the crew arrived ready to race 1k’s. Fueled up with ham and cheese sandwiches, the crew paddled to the start, careful to avoid plenty of lily pads. Despite an official warning for wearing both Churchill and Hughes Hall kit, the crew pushed away from the start and won against Globe RC by 4 lengths.

In the semi-final, “Chughes” lined up against Leeds University, who unfortunately suffered a steering issue at the starting line and found themselves in the bank. Chughes was awarded a winning verdict of “easily” and advanced to the Open 4+ final.

In the final, the crew once again toed the line. Eager to prove themselves against the University of York, they sat ready. At the go, the crew was off to a storming start and quickly began to inch forward. Once they’d built momentum, the boat moved through York easily and Chughes won by a margin of 4 lengths, securing winner’s pots for the first time this summer!

The following day, the boys returned to the scene of the crime and prepped for 500m sprints. Easily dispatching the home team, St. Neot’s RC, in the first round, Chughes built up some confidence. That confidence was shaken during the row down to the semi-final against Globe RC. Our outspoken Australian stroke had put down too much power in previous races, and his rigger had worked its way loose and sat in a precarious position. Despite material malfunctions, Chughes paddled to the start and waited for the race to begin. The start was tentative, the rhythm less than rhythmic, and the riggers were hanging on for dear life, but we were still able to outrow Globe and win by 2.5 lengths.

After tightening every nut on the boat, being careful to check both the top and bottom nuts, Chughes took to the water for their second Open 4+ final in as many days. The opponents were from Milton Keynes RC, and their bowman was a Churchill alum from the 2010s (rowed in the Baron when it was the men’s first VIII). This race represented a true test for Chughes, as Milton Keynes had not entered the 1k’s on Saturday and we had no bar with which to measure them.

A storming start from Chughes, the fastest of the weekend, saw the two crews advancing evenly, Chughes just pulling ahead. Gaining a few seats, the boys pulled as hard as Sam, the cox, required. Into the final 100m, Chughes were leading by just about a length, searching for some clear water. The FINISH call finally came and the crew put all their strength into the footplates to win by a verdict of 1.5 lengths.

St. Neot’s Regatta was a success for the composite crew. Two pots in two days was a rewarding treat for their training. The crew is looking forward to a few more races in the Churchill colors this summer. Thanks to NM1, the M1 Pair, and our Dev Squad trialists for providing some fun races to watch and encouragement from the bank. Thank you to our coaches, Will, Christian, and Roy, for all the time spent on the bank! 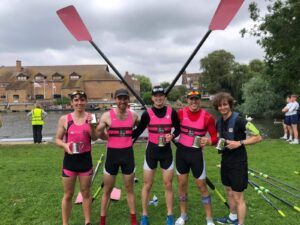 NM1:
We’d like to start by congratulating Jeremy Wilkinson for ‘graduating’ the same day as our race, and then immediately tell him to get a diary for only remembering a week before the race after confirming four times he could make a race. Secondly, we’d like to thank Peter Rugg for making up for Jeremy’s incompetence and putting up with us for the week and a half.

The eager anticipation of our first off-cam race was palpable. Despite the boat breaking in our very hands, some quick repair work, and trying to beat M1’s rigging time, the boat was ready. We started off during our warmup by meeting some fans along our run who decided our new name was the ‘Pink Bunnies’ and shouting that they ‘wanted us to win’, to which our response was of course ‘so do we’. The next challenge that faced us was the Marshalling ‘Lane’. Lane is a strong term… It’s mainly bank, reeds, trees, a platform jutting out, or even a crew who had strayed outside the racing line and decided they wanted to meet us. Occasionally we were treated to some limited open water and could row.

We were then side by side with University of York M1, our first taste outside of a novice division. The umpire, seemingly unaware of the meaning of the “2 minutes” they shouted, almost immediately afterwards called the start of the race, with us flying up to front stops with barely enough time to get ready and set the boat. The start was shaky but powerful, surpassing our fastest rate and significantly passing our fastest start (apparently meaning we need to try harder in training…). Surprised by still being able to see York, our gear change opened the way for the best rowing we’d achieved as a four, having only started three weeks ago after the end JER. David’s pushing us on, reminding us to push on the footplate (by imagining our enemies on the footplate) and treating us to our favourite calls of shoulder blades together and trusty reminders that our legs are what matter.

Coming up to the home straight we heard the distant voice of our true captain and old coach Alice, screaming at us that we were gaining, a call of a power 10 and a sudden surge of power sprinted us into the finish line keeping the pressure on York to the very end. Only losing to York (who came second overall) by 2 lengths and beating our target time by 15 seconds sets us up nicely for Sudbury and Peterborough in the coming weeks. You haven’t heard the last of us yet.

P.S. A Thank you to M1 for beating York in the final to avenge us 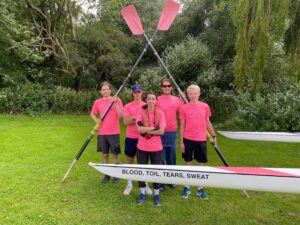 10 outings out in a pair, and the first time both of us were racing off-Cam :- the odds were not stacked in our favour. Marshaling was a grueling 1km of a water weed and a navigation lane that failed to account for trees hanging out from the bank.

Unfazed, but thoroughly nervous, we finally backed into the floating start line and adjusted our angles. Our competition – a pair of London Otters: at least half a head of height, 4″ of leg diameter, and 10-15 years of rowing experience on us. This did not fluster us.

The announcer called out the rcae start and we were off. The Otters pulled away but we kept our cool and pressed forward. The buoys meant to help us steer around the corner were in a zigzag fashion but by virtue of luck and sheer determination we managed to get by without too many issues.

When it seemed as though the race was lost, we suddenly hear the crowd erupt in cheering. “UP! UP! UP!” I scream, hoping that Nat would understand the enthusiasm to mean to bring the rate up. With one last push we passed the finish line.

We lost by a 1/3rd of a length, but the adrenaline and regatta experience made up for that with plenty to spare. We’re both excited to keep up the pair work and win some events in the upcoming regattas at Sudbury and Peterborough!

David and I were racing against a Globe RC pair. We were hyped to race again after what we consider to have been a beautiful performance on Saturday. I got the opportunity to chat with our opponent’s bow before the race, and he casually told me he’d been rowing for his club for over 10 years. I decided NOT to tell David that the guys had five times more rowing experience than us.

We pushed off, went up to the start line, aligned ourselves, and came to frontstops.
The start felt nice. We brought the boat up to speed, wound it up to 35 and kept it there.
“Nat more” called David as we were steering into our opponent’s lane.
“Nat light” called David 3 strokes later as we were steering into the marshalling lane.
“Nat MORE LIGHT” as a marshalling double scull entered my field of view on my left. We quickly corrected our trajectory, narrowly avoiding the crash, and got back into our lane.
Then came the “YEAH CHURCHILL” from M1 and Alice, as we brought up the pressure on the final stretch. It felt like the most chunky rowing we’ve had in the pair. We were gaining on our opponents. Unfortunately, we were still not going straight. We were in the middle of Globe’s lane. They passed the finish line just as we got a bump on them. Sadly this was not bumps, just a regatta.

We were faster. Once we learn to go straight, and actually stick to the 500 metre course instead of adding 50 or so metres of zigzagging, we’ll be unstoppable. Expect to hear back from us when that happens! 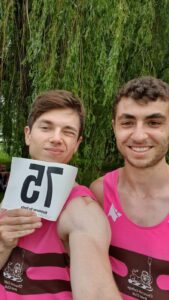 Alice:
I’ve been training with the cubc women’s development squad for the last 2.5 weeks; it culminated in St Neots regatta where over the whole weekend I was stroking an 8+, a 4+ and a pair.

The 4+ was on the Saturday and was made up of 4 speedy lightweights; we got to the final but were ultimately beaten by our dev squad openweights, despite a heroic fly and die effort.

The 8+ and pair were on the Sunday. Having never raced a pair before we were very excited to see what would happen, we managed to not capsize but unfortunately due to some spicy steering causing a rerow (the opposition were forced into the bank, sorry Maidstone) we lost our first race by a canvas. The 8+ was a different story! Again qualifying for a dev squad v dev squad final, and with the race being only 500m, we committed to the fly and hoped this time we wouldn’t die. We took a seat off the start and managed to hold on by the skin of our teeth to win pots, with our splits rarely straying above 1:40! It was brilliant having Churchill there to cheer us on, and I managed to get most of dev squad to cheer Churchill too. 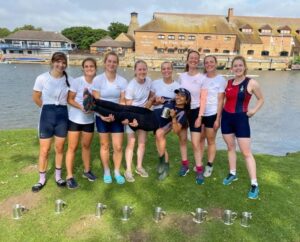