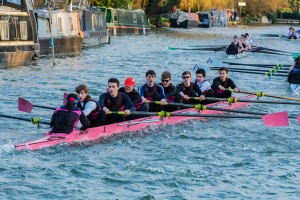 Wednesday: After a rather nervy start, M1 quickly settled in a strong race pace,
pushing away from Emma behind us and alternating between inside and
outside station with Clare in front. This continued all the way until
Grassy Corner, where Clare hit an obstacle parked on the side of the
river, slowing them down. We fully took advantage of the presented
opportunity, closing in quickly and after a couple of pushes, Clare were
bumped just round Grassy. The boat is looking forward to an exciting day
tomorrow, where we’ll (once again…) be chasing Fitz, with Clare behind
us looking for revenge.

Thursday: M1 set out knowing that they had a difficult task on their hands: hold
off a strong Clare crew eager for revenge, and move into Fitz before
they bumped Girton. After Clare closed in on us after a messy start, we
kept our nerve and held them at bay at about a 3/4-1 length for the
majority of the course. We progressively moved into Fitz, who were
gaining on Girton in front. A series of pushes past the Plough closed
the gap even further, and we bumped Fitz as they were inches away from
catching Girton. Congratulations to the crew for a truly determined race
today; dealing well with the pressure applied by Clare and coming out on
top of a tight sandwich with Fitz and Girton.

Friday: Today was a race rather unlike any previously this week. Without the
pressure or uncertainty of any crews behind us, we set off with a clear
goal – catch Girton. With our cleanest start so far, we caught up to
Girton slightly, but it was only up to halfway up to first post reach
where we started to make real progress. A few pushes and a powerful
hammer ensured that we rammed Girton hard as we entered the gut. Bring
on tomorrow.

Saturday: There is no other way to describe it — the final day of bumps was this
year was a cumulation of hours of training into some of the best rowing
we’ve done all year. During our warm up, it was clear that there were no
nerves at all in the crew. Only the knowledge that a professional job
was required to win our blades and send Kings to spoons.
Our strongest paddle up of the week was an indication of what was to
come. A lightning start settled into a powerful race pace, and we
quickly gained half a length on Kings before the motorway bridge. We
continued to eat into them and had two whistles halfway through First
Post reach. A hammer that was imbued with all the blessings of the
Pantheon of rowing deities followed shortly, and we transformed into a
wrecking ball, ramming Kings before first post corner. 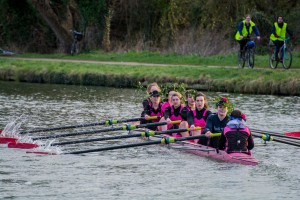 Wednesday: A successful first day of bumps for W1. Gaining our first whistle
halfway through our start sequence, there was no way we were going to
let Catz get away from there. The second whistle came just before the
motorway bridge, with the third following soon after. We then moved in
for the kill, hitting them hard on first post reach. Tomorrow we chase
Caius W1: watch out Caius, we’re coming for you!

Thursday: Another exciting day for W1, bumping up on Caius. We had a strong start,
gaining on Caius from the first strokes. We then settled into a strong
rhythm and kept eating into them, getting our first whistle just after
the motorway bridge. Our 1 minute push bought us our second whistle
halfway down first post reach. Our cox, Katie, was super excited to show
off her lines around the corners today after yesterday’s early bump. But
she had to settle for first post only as we gained 3 whistles coming
into the gut and went in for the kill, finishing them off before grassy.
Medwards: beware you are next.

Friday: Yet another awesome row for W1. We went into this race knowing that
Medwards were going to be tougher to crack than Caius but we were
determined to get them anyway. The start was a little nervy and not our
best but we settled into a strong rhythm and started to move into
Medwards. Behind us Caius had decided to fly and die, pushing off a
strong Girton crew into us. They gained an optimistic whistle on us on
first post reach but we soon put it right with a push into the corner.
By this time we had also gained a whistle on Medwards. We kept pushing
into Medwards through the gut getting 2, then 3 whistles by grassy. On
Plough reach we gained overlap and continued to row past them until they
eventually conceded when our bow was past their 3 seat. Tomorrow we
attempt to send Queens to spoons for the second time in a year. Bring it
on!

Saturday: I have heard the saying  many times that good crews go up and lucky
crews get blades. Unfortunately W1 found out how true that statement is
yesterday. We had a strong start and had a whistle on queens well before
the motorway bridge. We kept gaining through the stride and got up to
3/4 of a length. But then we caught a boat stopping crab which we
couldn’t retrieve. Medwards came up on us fast after that and we were
bumped. Never the less, it has been a successful bumps campaign for w1.
We have bumped 3 times, got inside the top 10 in the first division
(albeit briefly) and we achieved what we set out to do: to row everyday
to the best of our ability and make the most of every stroke we had. I
am a very proud captain and everyone in the boat should be very proud of
what they have achieved and how far they have come. Now forwards to
WEHoRR and Mays.

Tuesday: Catz M2 came out strong today, going for the early bump on our M2, and
unfortunately they were successful thanks to a disjointed start by
Churchill. For all eight rowers it was a first time rowing in bumps, and
maybe the inexperience showed, but we’ve learn a lot from today and
we’ll be right back at it tomorrow looking for revenge and a re-bump on
Catz.

Wednesday:  It’s safe to say Churchill M2 fared far better today than Tuesday,
making decent progress through the bumps course, but unfortunately we
were still bumped by Hughes Hall M1, although in slightly unusual
circumstances. Technically we weren’t actually bumped, but unfortunately
confusion over the rules led to us conceding when we were perfectly
entitled to keep rowing. Nevertheless the improvement over Tuesday was
massive, and I’m confident for a better result on Friday as we attempt
hold off Clare Hall M1, whilst also seeking revenge on Hughes Hall ahead
of us.

Friday: M2’s race plan for the day was to row over, having been bumped on
Tuesday and Wednesday, and it looked promising for us at the onset as
the two crews behind us, Clare Hall M1 and Magdalene M2, bumped out
early. This left LMBC M3 chasing us for the overbump, and unfortunately,
having made up a lot of ground on us over the long reach, they managed
the bump just outside the P&E. LMBC M3 deserve a lot of credit – they
rowed very well and did not give up – but I’m still not disappointed by
our performance. The circumstances are tough and we gave everything we
had. Tomorrow we have one last chance to avoid the dreaded spoons, and I
think we have a great chance of even bumping on Clare Hall M1 ahead of
us.

Saturday: Well, Saturday’s race marked an end to possibly one of the most bizarre
Lent bumps campaigns ever, and we certainly went out with a
bang…already -5 down from previous days we were determined to regain
something by bumping Clare Hall M1 (who we’d performed far better than
in previous races). We went out for the sprint and early bump, however I
quickly knew the chase was over when I caught a glimpse of our number 3
floating through the Cam in front me, 15 strokes into the race. The
chaos that ensued was enormous, with FaT M3 holding it up extremely fast
to catch hold of our rower, before multiple collisions destroyed
Peterhouse’s rudder and sheared off Robinson’s whole rigger. It was a
bit scary for a moment, but our rower is safe and was able to get back
in the boat for the row home, which is the most important thing. As for
the racing, most of the division below us rerowed, whilst there is some
confusion over our result. I’m led to believe that we’ve been given a
technical row over, based on the fact that we were pulling away for FaT
before catching the ejector crab, however by any sensible logic it would
surely be a bump for them. [Note: this was subsequently confirmed as a
bump for Tit Hall.] Regardless, it’s certainly been an eventful first
bumps for all nine rowers, and we’ve got a lot of take away for Mays.

Tuesday: After a strong start from W2, we quickly got to canvas on Clare Hall
when some confusion led to us holding it up. We restarted quickly
without any pressure from Magdalene W2 chasing us and set off after
Clare Hall again. Unfortunately, we were not able to get the bump on
Clare Hall but ended up with a disappointing but ultimately strong row
over with some of the best rowing we’ve had as a crew. Tomorrow, we get
Clare Hall!

Wednesday: Having scared them yesterday, we set out to get the bump on Clare Hall.
Again we quickly got to canvas at which point eight rowers nearly became
seven due to an overhead crab and Clare Hall frustratingly pulled away.
We ended up rowing over again but in a six with the boats below us
bumping out. Third time lucky on Friday.

Friday: Today was W2’s toughest day so far as we set off again to bump Clare
Hall. After a messier start than usual, we began to gain but came under
pressure fast from Trinity Hall 2 behind us. We got to half a boat
length on Clare Hall by First Post but through the Gut, Trinity Hall
gained overlap on us. Today however the God of Bumps was on our side and
their bow caught a crab, taking them out of the picture. We reset and
continued after Clare Hall but shaken from our close call with Trinity
Hall, didn’t manage to close the gap. Despite this, it was a strong row
over and we go into tomorrow ready to fight even harder for the elusive
bump up on Clare Hall.

Saturday: W2 set off today knowing that Trinity Hall would be out for vengeance
after narrowly missing out on a bump yesterday. Our start was our
cleanest yet, and as usual we started to gain on Clare Hall. We settled
nicely into race pace but were soon aware of the faster crew catching us
from behind. Clare Hall also held us at 3/4 boat length as they closed
in on St Catz 2. We managed to hold Trinity Hall off until the Gut where
they gained overlap and then the bump. Despite being bumped, spirits
weren’t particularly down, given that it was our best rowing to date and
we held Trinity Hall off much longer than other crews in our division.
Well done as well to Clare Hall on their bump on Catz 2: at least one of
us managed to bump up…