On the 12th of December, six members of CCBC travelled to the Lee Valley VeloPark in London’s Olympic Park to compete at the British Rowing Indoor Championships (BRICs). Slightly nervous to be competing at such a large event, but quietly confident, the whole squad was ready to give a great performance to end a successful Michaelmas term for CCBC.
The team relay proved to be yet another case of CCBC playing the underdog, competing against a huge, more experienced Warwick Uni team. However, a committed performance from all members of the team (Gabi, James, myself and Paula), as well as a highly efficient seat swap-over technique placed us 2nd in the 4km round (+7.4s) and 1st in the 2km round (3.7s). Our team ended up having the faster split /500m averaged over both events, but unfortunately the results were calculated by adding the times together, and so Team #pink narrowly missed out on the gold, but finished in an impressive 2nd place nonetheless.
More success was in store, with the 2km events coming up. Anna and Bradley smashed their previous PBs, with impressive 7th and 6th place finishes in the very competitive U23 Lightweight Women’s and Men’s categories. In the Men’s U23 open category, a lagging middle kilometre coupled with a desperate final sprint placed me 10th overall. However, the highlight of the day was provided by Paula winning gold in the U23 2k women’s event by just 0.1s after a neck-on-neck 500m sprint with two other competitors. This result is even more impressive considering that she had competed in the 1st round of the team relay just 90mins before!
Huge congratulations to all members of the team for giving an excellent first impression at BRICs. Thanks must go to Jonathan for coming down to support us, and to Silvia for the help on the day and the race preparation beforehand. – Daniel Manela, Men’s Captain 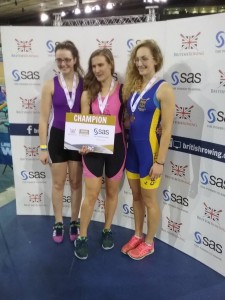 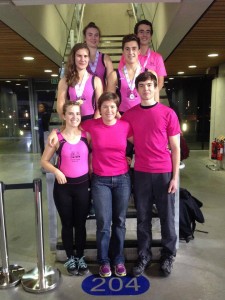