CCBC had an eventful start to the eights regatta, which saw some exciting side by side racing over a 1km fro the reach to the P&E. Here’s how the six racing crews got on:

Racing against Selwyn NW2 today and the race preparations began with Amy Rees, a member of the crew who unfortunately was not able to row today due to injury, being a gem and providing us with bright pink face paint. With our go faster stripes and our coxswain, George Crimes’ CHU forehead face paint, we were raring to go.

After a very dodgy practice standing start on our way down to the marshalling zone, we knew what we had to do and our practice paid off. Starting out incredibly well, we managed to get ahead of Selwyn very early on in the race, even despite the fact that Selwyn had the more advantageous side of the river for the start.

Unfortunately, today was not our day though… First the gate for one of the oars came open and George had to call the whole boat to a halt. We were still powering on at this point though, successfully managing to catch up to Selwyn within about 3 strokes.

Our recovery didn’t last long though because then Camille Bouverot’s (stroke) seat came off and from that point onwards we had to row in sixes. Nonetheless, even with only six rowers and after another unfortunate crabbing incident, we still managed to make some gain on Selwyn, finishing approximately the length of one boat behind Selwyn thanks to George’s motivational power 10 calls and the amazingly helpful shouts from bankside (shoutout to Amy’s mum especially!).

On our return to the boathouse, our coach Chris Hughes made sure we all now know what to do in the event of another seat disaster, but fingers crossed that doesn’t happen again! 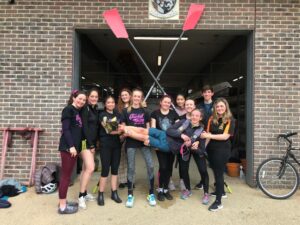 As with all great stories: ‘Toy Story’, ‘Up’, ‘Inside Out’ ours started with moving – moving boat that is. Jim got taken out for the time of its life with NM1 today as we prepared to face off against Darwin NM1. As ever arriving stupidly early in some cases, and after careful inspection by fellow LBC Chris all our seats were oiled up, the wheel’s flowing almost as freely as our chat.

Excited after yesterday’s time trial with the knowledge that we’d managed to beat some senior’s men’s crew we were prepared to paint the river pink for out first side by side race. With Moose still injured, we had the pleasure of Jude’s company and with Jeremy prioritising a physics exam (disgusting right?) we were also grateful for Kuan to be joining us. But with introductions over back to the race.

Our row down was kept calm and controlled by David as he managed to steer through the carnage that can only be described as novices marshalling, with some of our most consistent set strokes taking place under the watchful tuititon of Katie. But of course the most signficant debate being when to dekit in the chilly wind.

After a while we ended up on the start line anxiously awaiting Darwin being able to get straight so that we could set off, a few calming words from David and we were ready to go.

We managed the cleanest start we’d ever felt, and immediately pulled away from Darwin building to a length ahead over the first 350m. However, the excitement began to get to the crew and with the fear of crabbing ever present our looseness was replaced with tension and our excitement with complacency. A chink in our armour Darwin were more than happy to try and exploit. Our early gains helped us push ourselves over the finish line and, although much closer than we’d have liked, get ready to fight another day. 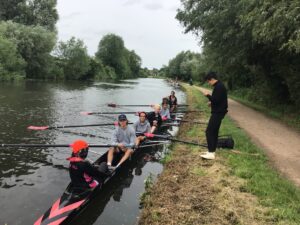 Starting the afternoon with a casual warm up paddle, NW1 quickly found the balance and rowed confidently and mostly continuously up to the motorway bridge, before spinning and pulling in for a quick break. On the instructions of Hei Li (the Marshall), we then moved along to our final jelly baby stop. After our quick refuelling, we moved forwards for a very gusty start; some quick adjustments from the umpire and we were off.

After a slightly abrupt start, in the words of the 7 seat, the water quickly became ‘very crunchy.’ Rowing on through a somewhat spicy blade crash, the instructions to ‘keep rowing’ came through from the boats higher power, Luke, we continued through some very clashy water leaving behind a double crabbed Homerton crew.

Pulling ahead into clear water at a very much intended and definitely not overrated rate 36, we found our stride and continued to pull ahead for the rest of the race. With a final ‘step up’ call under the bridges, we put everything into the last sprint to the finish to safely secure our victory by several lengths. 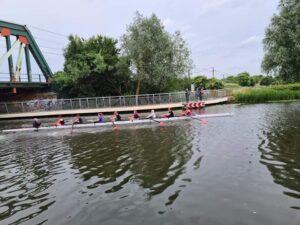 The row up today was very clean and productive for W1. Katie Kirk joined our coach David on the bank, and shouted some last minute encouragements and reminders on holding finishes. Our practice start was solid, as we reached the top of the reach we caught an eye of our opponents: First and Third W1.

Churchill W1 had bumped FaT in lent bumps 2020, we wanted to keep our winning streak!

Sadly our start wasn’t the best we’ve done and FaT gained 3 seats off the start, having started only slightly in front of us. We attempted to stride but maintained the rate at 34 , holding them for a good portion of the race as we got into a good rythm mid race. We made a move under the railway bridge and gained 2 seats in a matter of seconds, a very effective move that came a bit late, and FaT won by less than a boat length. Overall it felt better than the getting on race and we’re looking forward to tomorrow!! 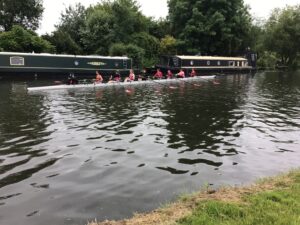 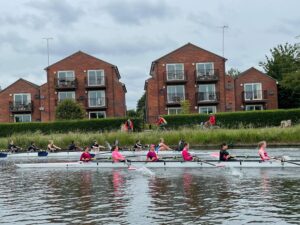 On our first regatta race, our crew

Was up against LMBC M2.

With our heads focused and ready,

And when the sound “go” was uttered, off we flew.

Despite our best efforts, slowly did they pull away,

And held us behind to the finish from railway.

However, our unofficial split of 1:48

Was an improvement from yesterday’s rate,

And with our heads held up high, M2 Torpedo looks forward to our race the next day.

Waking up, M1 realised that LMBC had shot the first shots in what would go down in history as one of the greatest meme wars. M1 were quick to retaliate with some witty content, bringing up team morale significantly.

After almost 12 hours of impatiently waiting for their ATBH time, everyone turned up early and warmed up with a quick and chunky paddle down to Jesus Lock.

Marshalling was good fun with M1 making unexpected friends along the way with Trinity Hall M1 as we waited side by side for our division to start.

The starting line was met with calm nerves from our side. We were ready with the best platform Churchill M1 has seen in years. Off the start we hit a record high of rate 44. While LMBC M1 were bigger and ultimately, faster, we managed to hold them off surprisingly long. The first 100m saw our two boats close enough to seriously put the pressure on LMBC – they were getting nervous and it showed. They pulled away steadily after that point however, but we were satisfied with our small victory.

The crew is ready to give it their all again tomorrow with any crew being fair game.