6 Churchill crews took to the Cam today for the first day of May Bumps. Here’s how they got on (in racing order):

The rain did not deter a still heavily substituted M4 from (for most of them) their first ever experience of Bumps.  The row to the start was definitely less shaky than for the getting-on race and the practice starts felt strong.

With a mix of nervous and experienced rowers, confidence in the helm and support on the bank; a cannon signified four minutes to the start.  With a number of new boats on the river, no one really knew how the novice boat would fare on its first outing, but spirits were high.  Another cannon, the push-off, a count down then an achingly long silence before the boat was full of the sounds of draws, winds and a power ten.  The start was convincing and a relaxed race pace was quickly maintained by the novice crew.

It soon became clear that all the surrounding boats has quickly bumped or been bumped as the rate was wound down for the rest of the race and the row home.  The chance to bump had escaped the crew, but the prospect of spoons was already off the table.  A relaxed but welcome start to M4s Bumps campaign, with nerves to be tested again tomorrow chasing Darwin M3 whilst being hunted down by a seemingly quick Caius M4.  Most of the usual novice crew will be back in the boat, with rain again forecast for the second day of rowing.

Cautiously optimistic is how one member of our crew described our mood as we met up at the boathouse—a rather accurate summary, as we knew we had it in us to chase down Fitz W3 and keep Robinson W2 at bay, but we didn’t want to get cocky.

Our row up was relatively nice and set, only somewhat thrown off by a dysfunctional cox box that forced our Women’s Captain to sprint back to the boathouse to retrieve a replacement. There was palpable tension in the boat, however, as people began to get nervous, including our substitute cox Kathryn, clad in her Blues stash (that we deliberately ignore she got for rowing, not coxing).

As Roly pushed us off and the critical moment approached, we came forward and squared in as we had practiced many a time. Our start was maybe not the cleanest we had ever done, the adrenaline making it a little splashy around the edges, but it was certainly the most dedicated. We could quickly see that we were pushing Robinson away. We cycled through our start sequence until Kathryn called a stride that didn’t quite end up being a stride.

The whistles came in early. One whistle—already? Whatever we were doing was clearly working. Then two. Three. Trying not to let anything fall apart. There was no letting up now, we were clearly right on their tail. Continuous whistling. Kathryn made the thrilling announcement that we were going in for the kill. A couple very powerful strokes, squeezing hard on the legs, then up two on the rate.

Fitz’s cox conceded. We had managed to bump in around 90 seconds, just past the motorway bridge. We held it up hard and Kathryn urgently tucked us into the bank, as Robinson were still being chased down by FaT. Hearts still pounding and breathing still heavy, we collected our hard-earned greenery. Who knew sticking leaves in your hair could feel so good?

After exchanging cheers with Fitz, and being congratulated by a courteous Fitz coach, we rowed home, proud of what, for many of us, was our first ever bump (special shout-out to Holly who has now got her first bump in 4 years of being at Churchill). Hopefully more to come!

Scooping up spoons during Lent bumps, M3 did not look to be in its best shape this year. However, the coming of spring is said to bring new life and with it – new crew members.

After an unusually slow start (W1 can attest that our usual starts are not half-bad) and more than a week of not training in 8s we found ourselves in an unpleasant situation – a canvas away from Homerton M2 coming up behind us (who we were brushing off minutes prior) and more than two-and-a-half boat lengths away from our target – Catz M3. The gravity of the situation could be read on our stroke’s face (as noted by our blissfully-ignorant-until-that-moment cox).

Regardless, we kept pushing on, supported by an amazing bank party. Homerton was caught up by Downing around first post corner, leaving us to focus all of our energy on catching up to Catz. Taking a near-perfect line around grassy, combined with Catz just dying off in strength, we managed to make up the distance.

With a solid thunk, our first day of Mays was over and the crews’ spirit was higher than ever, despite the cold rain battering down.

Going into the first day of racing, confidence in the crew was high after the strong performance at Champs Head earlier in the term (where we came second in the division). From that race, we also knew that the crew chasing us, Queens’ M3, was unlikely to be any real danger. However, the crew we were chasing, Jesus M3, had not rowed in that race nor any other race all term and so was a rather unknown factor.

After pushing off from the boat house there was a long wait in the marshalling area due to a re-row in the previous division. The rain, which had picked up at an inopportune moment, dampened our kit but not our spirits, and after a strong and stable row up to the start, the starting cannon sounded. The start itself, while not the cleanest we had managed this term, nevertheless showed the power available in the crew and we quickly pushed away from the boats behind.

As we powered on down First Post Reach we started to slowly edge onto Jesus M3, but they were gaining on Peterhouse M2 at least as quickly. In the gut, sensing something had to be done, our cox Angela Harper called for pushes, which were countered by Jesus with pushes of their own, leaving us about one length behind their Filippi shell.

Taking a close line around Grassy Corner, fate dealt us a cruel hand. Peterhouse M2 had failed to respond to the pushes from us and Jesus M3, and got bumped coming out of the corner. Jesus did not clear quickly enough and so our cox prudently had us hold up the boat to avoid smashing into the stationary boat. A few seconds later, with Queens’ M3 having closed the gap from 3 boat lengths to less than 2, the river was clear again and we started winding it back up for the remainder of the race.

Unfortunately, with the latest bump by Jesus, the six crews in front of us had now bumped out, thus denying us the opportunity to aim for an over-bump and keep our hope for blades alive. Steadily widening the gap to Queens’ chasing us, we dropped the rating a bit and finished the day having rowed over amidst bumps, (slight) carnage, and rain.

While not necessarily the result we were hoping for, the speed difference between us and Jesus M3 proved smaller than between Jesus M3 and Peterhouse M2. Tomorrow, again being chased by Queens’ M3 and now chasing Peterhouse M2, we look forward to showing the river all that the Torpedo is capable of.

Mays 2018. A sad end to M1’s Bumps campaign as a faulty rudder shattered their chance to defend a place in the M1 division. Girton were awarded the bump.

Lents 2019. Again chasing Girton, M1 were determined to prove their worth but sadly were denied the bump by a speedy Magdalene M1.

Mays 2019. Grit and determination; the whole crew had been working hard towards this moment, preparing to right the wrongs of the previous year and to take their first step towards breaking back into the M1 division. Girton were not getting away this time.

Quick off the start, both crews held station through Grassy Corner, Churchill clearly with the intention to give their supporters a good show by reeling in a slowly crumbling Girton M1 to one whistle as they passed the Plough. As we rounded Ditton Corner we collected them in our sights and began to chip away, each well-placed power-five call gaining yet more ground as we left our determination in the water. Two whistles, then three; we were gaining. As we hit the railway bridge we hammered, blasting forward to finish them off. We’d done it.

With a new-found confidence after gaining M1’s first bump since 2016, we prepared for our second race, this time as sandwich between the M2 and M1 divisions. A quick start and concerted effort were unfortunately not enough as LMBC II and Wolfson in front bumped-out, leaving us to face an optimistic over-bump on Selwyn which never came.

Churchill W1 went into day one of bumps feeling confident about our chances of catching Girton, based on earlier performances this term and our swift bump on them in Lents. Watching our M1 bump Girton M1 while we were marshalling only further solidified our resolve to add a second Churchill-Girton bump to the day’s achievements.

The race was slightly delayed due to complications with Christs’ cox, but Katie kept everyone’s spirits calm (except a certain member of the bank party, who continued to predict the four-minute cannon every minute after it was first due) by telling us about her bovine adventures through the coxbox.

The race began and we had a clean start, winding the rate high. As we came under the motorway bridge, through a cloud of cannon smoke, we hit the end of our power ten and the call came to stride. Buoyed up by adrenaline, any change to our rate was negligible, and it soon crept back up again as we swiftly gained one and then two whistles on Girton. Katie told us we were still at rate 41, but we were staying together and the race was looking to be a short one, so we continued to hold that pace.

Three whistles came, and the call that Girton were taking the corner too wide. We knew they were ours. Katie made the kill call and we gave it everything; the whistles became continuous and we successfully made the bump, on first post corner. It was a great start to the week, and tomorrow’s goal is to bump Clare. The race will likely be longer – so an actual stride will be needed! – but it should be well within our ability.

Here’s how the overall results stand so far: 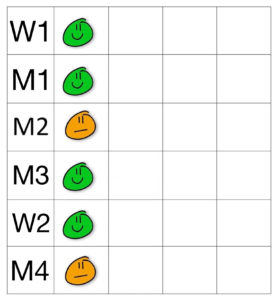