Last weekend was full of racing for CCBC, with crews racing in both Head to Head and City Sprints, as well as Alice Dyson and Iris Powell racing at BUCS. Alice raced in a Chu-Newnham 2- which placed fourth overall in the intermediate division, beating two other blondie/lightweight pairs in the process (!!!), and Iris racing in the CUBC development 4+ and 8+.

Having many members of the M1 crew either sitting exams or finishing up their dissertation, we were racing in a scratch 4+. On the first 2k, despite the somewhat splashy rowing we managed to overtake the quad in front of us by the finish line. The coxbox broke in between the two races and so Luca and I as bow pair had to guess Vincent’s calls, making for some interesting marshalling at the Loch. It discouraged us from attempting the infamous tap spinning. However Vincent’s voice became more audible once in race mode, and so with his help and our new found rhythm, we rowed the second 2k much cleaner. We overtook an 8+ down the reach, and got overlap on another 8+ by the finish line. We ended up winning our category (yes, it was just us). After the race, we did a few standing starts, as we realised it would be good to get some practice before the next day’s regatta.

With no fixed crew for the term yet, we took to the water today for our first race with none of us yet certified Churchill torpedoes, plus Chris leaping into 6 seat to save the day.

After an amazingly sunny row up (preparing for the inevitable sunburn) we lined up to race. With Churchill W2 chasing us (scary times!) we raced a fast first 2k, losing only a couple of boat lengths on LMB M3 and – after LMB made a speedy overtake on FTT M3 – we were gaining considerably on FTT as we reached the first finish.

A quick spin at the lock, and before long we were lined up again and prepared to hunt down FTT on the second 2k. With some tidy and fast rowing we made good headway on FTT, catching them on Ditton corner. Some solid rowing brought us easily clear of them and we were across the finish line!

Today’s racing was really encouraging for a great summer term ahead, and with M2/3 out again on Sunday for city sprints we are certainly getting in the racing experience! 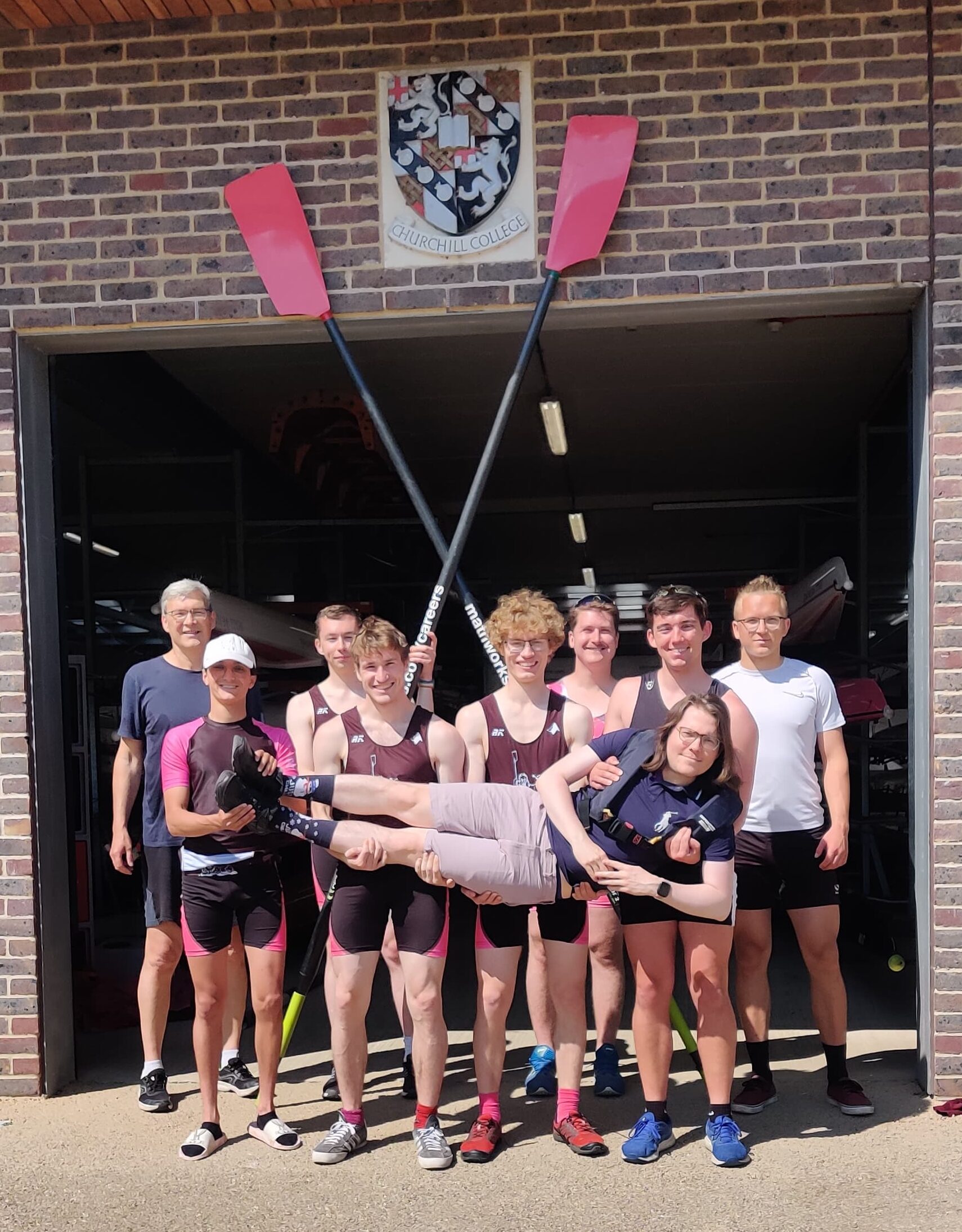 With Alice and Iris destroying all opposition at BUCS this weekend, the remaining members of W1 were extra keen to prove that we can continue to paint the river pink even in a 4+ (after all, it’s not the size that matters…). Even though we only had one outing together before we were due to race, on a beautiful sunny Saturday the middle four showed up to the boathouse confident and ready to fight. Armed with a bright pink boat and a snickers bar (#notsponsored), we paddled down to the start line. We began our first 2k with a powerful start sequence under the Railway Bridge and flew down the reach; as we neared Ditton corner the power started to drop off, but not our determination, and with Hei Li and bow pair giving us some excellent corners we pushed out again, easily shaking off the mixed Peterhouse 4+ behind us. After a final sprint down to Motorway bridge, the first 2k was over.

As we span and marshalled at the lock, we told ourselves we could push even harder for the second 2k, encouraged by Stella on the bank, the new energy from the freshly devoured snickers and Hei Li’s ‘honk honk’ call. Determined to finish this race with absolutely no fuel left, off we went again, lifting the boat with every power call and out of every corner. Even when our rowing became a bit messier as fatigue kicked in, we never gave up and pushed to the very end, and even a spider sneaking into the boat during the finishing sprint (perhaps a sabotage from Peterhouse?) didn’t get in the way of our speed.

This race was a great start to W1 training this term. As we return to an 8+ again and face fierce competition at Bedford next weekend, we will remember the aggression and power we found today! 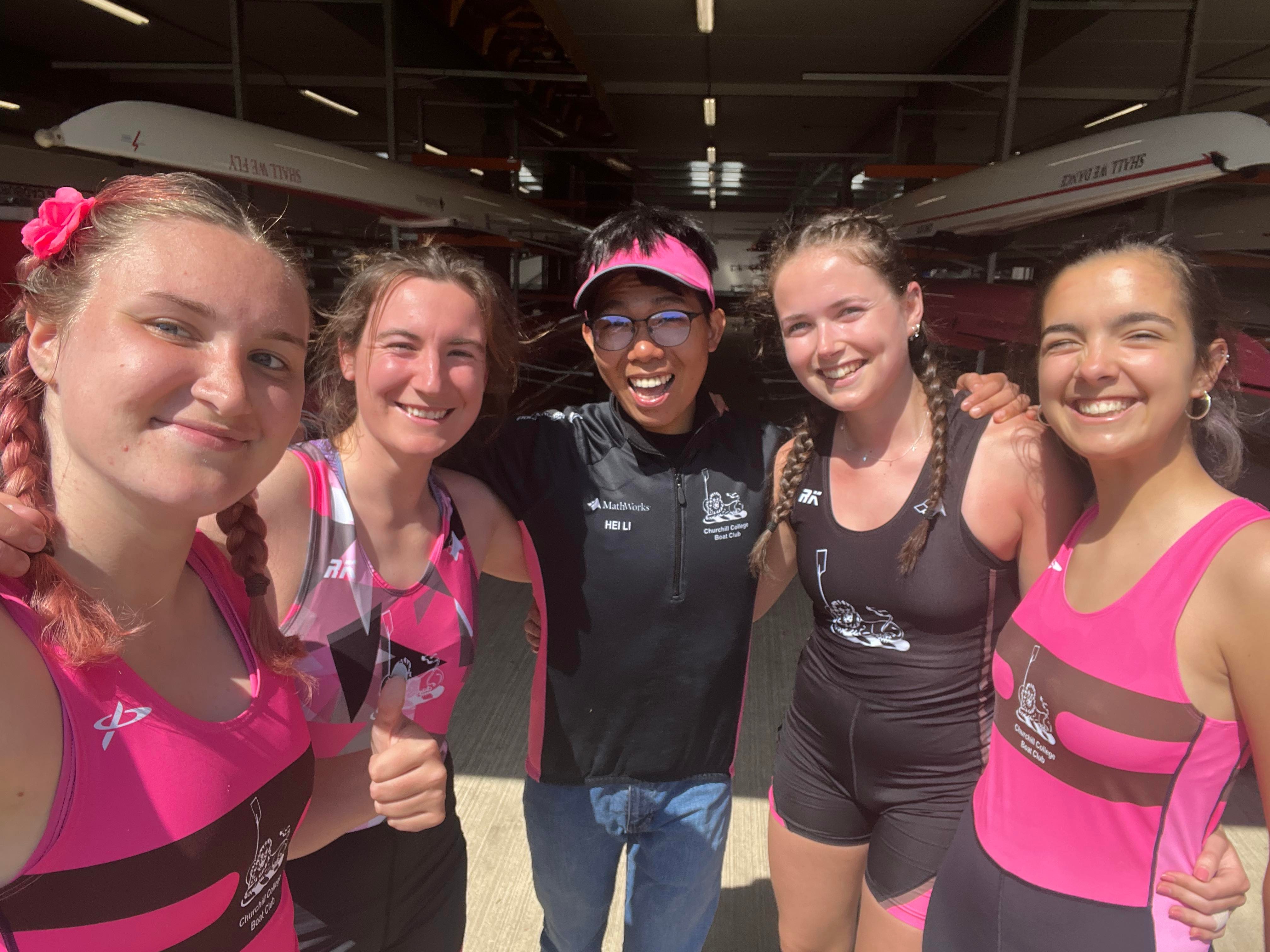 W2 arrived at the boathouse on Saturday morning for our first race of the term- the Spring Head to Head. The seemingly simple 2x2km format appeared easy compared to the chaos of bumps, but was made more complex by the fact that the crew line-up had changed significantly, an unfortunate bow (me) was being given a baptism of fire into stroke side rowing, and a combination of a 6-7 bucket and a bow rigged bow-4 presented a challenge for our co-ordination and George’s steering.

Nevertheless, we arrived at the start-line at the railway bridge full of optimism after a successful pre-race paddle. We began our rolling start, winding it up as we came under the bridge and demonstrating the full force of our power ten as the marshal’s horn went off. We kept a consistent and sustainable rate as we went up the reach, holding off the pursuit of Peterhouse as we came into Ditton Corner. We kept the power on through the corners, holding a strong pace all the way through to motorway bridge.

We had a short break whilst spinning and marshalling and, encouraged by the sight of our fellow Churchill crews, arrived at the start line again ready for the next 2k. We went through a successful start sequence and settled into a sustainable rhythm once again, feeling more in sync and able to put the power down even more after our first run. We managed to increase the gap between us and Peterhouse behind, pushing through the footplates to power through the final stretch and under railway bridge once more.

Overall the race was a great success; we came together quickly as a crew to put forward a great performance, and we know we have it in us to get stronger and faster for a great term of rowing with W2. 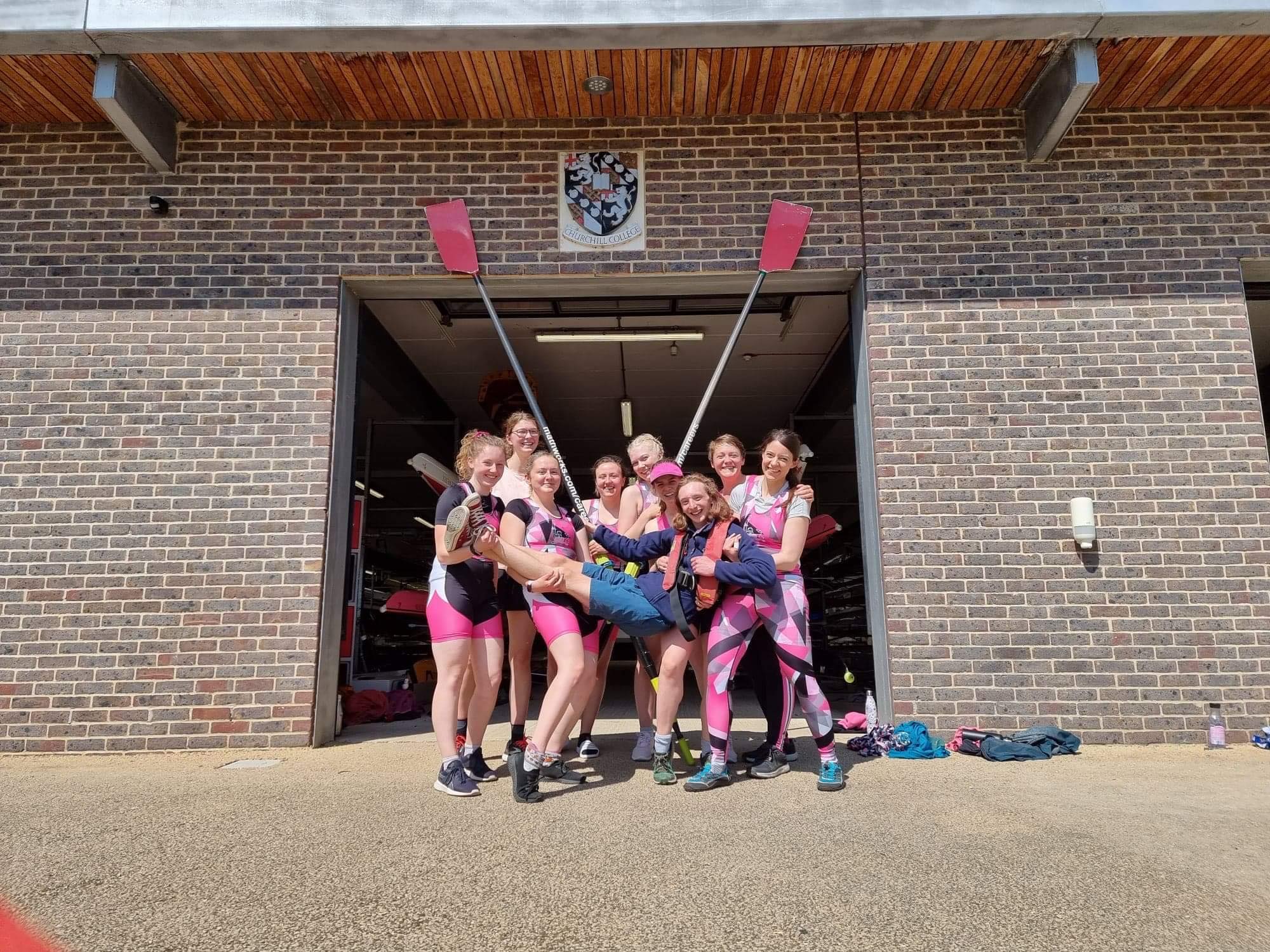 M1 entered another scratch 4 for the city sprints regatta today as other members of the crew finish their exams and dissertations this week. Unfortunately it was just one of those days for the boys and despite ranking second in the time trial they were eliminated in the first round of the draw with the rowing never really getting going. A day to forget for the M1 4+.

In more positive news Jon Bennet also represented the first boat in the 1X category and had a much better showing. In his first sculling competition (and perhaps 4th sculling outing) since leaving school 3 years ago he came second overall. A bye in the first round and a win in the semi-final against a boathouse rival from Kings set up a final against a former international sculler from FAT. It was a close run race but unfortunately the result got away from Jon in the end.

The end of crew selection week for M2 and M3 brought the final scratch 8+ for the term to City Sprints. Confidence was high going into the race after the performance at Head to Head the day before and after the training running up to HoRR and at Camp.

In the first round we pulled away quickly although were a bit choppy, after opening a fairly wide lead the stress of the situation abated quickly and soon we were preparing to spin for the next race.

There was some confusion at the start line as to who we were racing, Pembroke M3 were the targets although if we learnt anything about the race it’s that we were truly racing ourselves. The second start was much calmer falling into a more steady rhythm with the platform to go on the attack. By 3/4 of the way in we were 10 seconds ahead of the time we’d posted in the previous round.

Long story short – we won pots. They can hold a surprisingly large amount of beer. 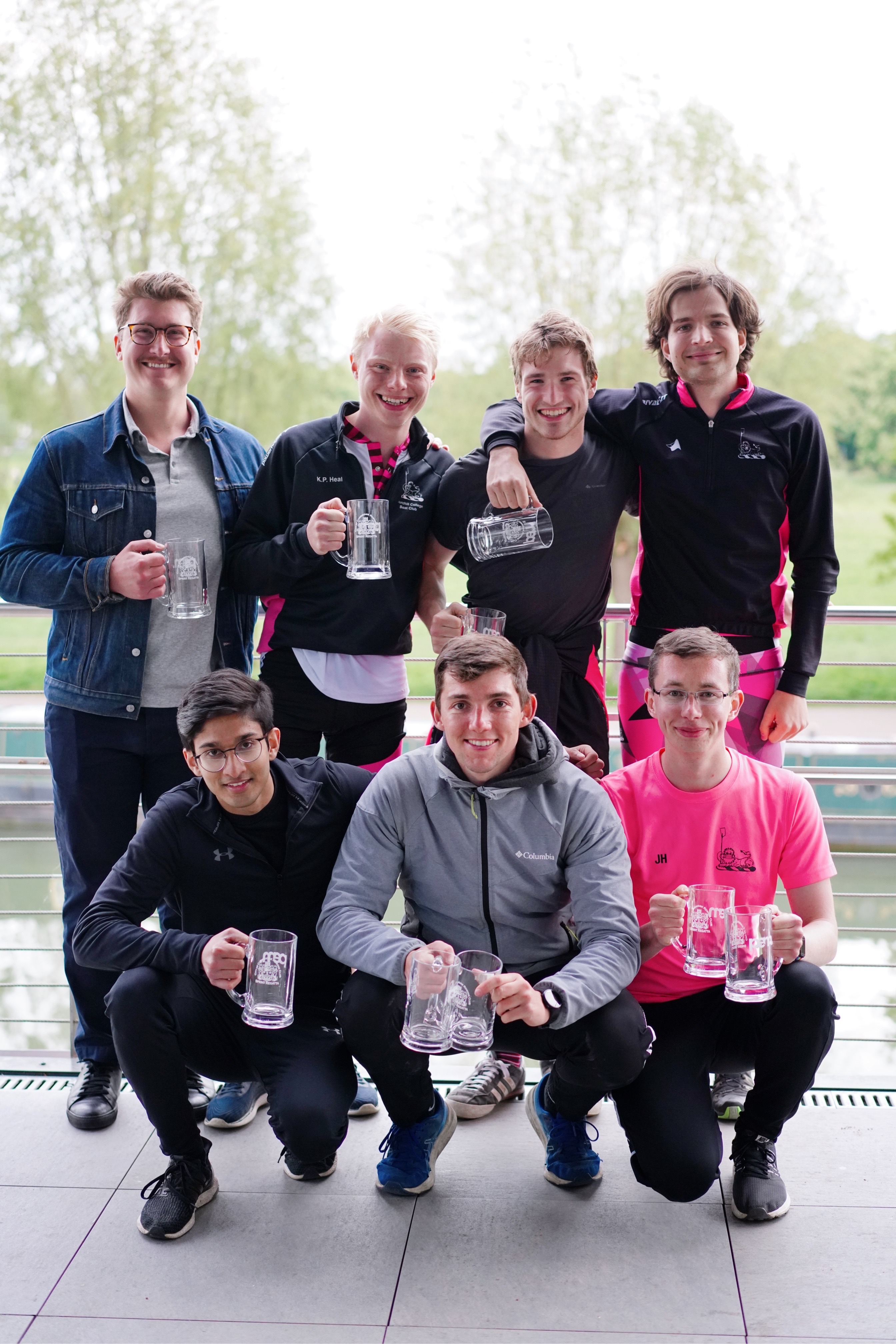