A respectable 12th place from Churchill NM1 at Quergs 2015, with an impressive 1:25.7 from one novice. Overall a fun event that hopefully got the novices keen for Emma Sprints this Sunday. – Iolo Squires

2015’s Quergs saw one of the strongest performing NW1’s Churchill has had in years. In the heats the women had their first chance to put their training into practice and every crew member put in her all, making us come in a close second behind Newnham and thereby securing our place in the finals. The break after the heats gave everyone a chance to recover, eat and cover their faces in Churchill’s mandatory pink war-paint. Thus armed, the crew went into the finals with plenty of determination and typical NW1 enthusiasm, ensuring every crew member pushed herself to the max, thereby coming in 4th overall – only 4.3 seconds off the winning time. The night was enjoyed by all, enforcing the crew spirit and making the lower boats women’s captains extremely proud!!- Paula Wulff 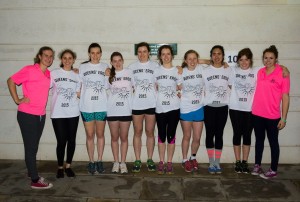 After watching the Churchill lower boats compete, the seniors knew that they couldn’t let the rest of the boat club down and gave it their all. The men gave the mixed crew a strong start, helped along with much cheering from the novices up in the balconies, which was then carried through by the women (despite half of W1 being off trialling…). Coming into the last 1km we were neck-and-neck with Pembroke, with Sidney and Queens not far behind. However, with a final push from the men we managed to secure 2nd place, only 0.9 seconds off Pembroke who came in first. All in all, a promising start to the rowing year! – Paula Wulff