Last weekend CCBC returned to Peterborough for another weekend of racing, joined by Hughes Hall Boat Club and bringing home a few more pots! Here are the race reports from the three crews: 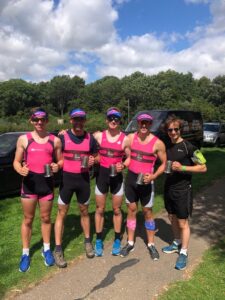 After the culmination of the collegiate rowing year with the June Eights (Bumps replacement) Regatta, there were a few graduate students at Churchill College still around and keen to enjoy some summer rowing. Very quickly a composite 4+ crew was formed with Hughes Hall, who ably provided a coxswain and strokeman, and training began. The crew began the summer with two goals, to be competitive at Peterborough Summer Regatta and to be beaten by Brookes F in round one of Henley. Unfortunately, an `administrative’ error meant the entry for Henley was received just hours too late and the crew had to focus on building solely towards Peterborough.

Though Peterborough was the main goal, it was not the only regatta the crew had entered and they came into the weekend having enjoyed 10 victories in their 11 races before Peterborough (and one detour into the reeds at Sudbury 50 metres before the line.) Much of this success can be credited to the expert coaching the crew received from Will Miller who honed the crews stroke and starts in the week’s preceding the regatta. Thank you Will, we would have come this far without you!

The format of the regatta saw 3 `semi-finals’ of 3 crews competing for 4 spots in the A final and 4 further spots in the B final. The Chu-Hughes crew were drawn against a Globe crew they had previously met in St Neots Regatta 3 weeks prior and a Cambridge 99s crew featuring Churchill M1’s coach for this past year Robert Murphy. While the crew were thankful to 99s for towing the Churchill boats to the Peterborough regatta they didn’t show it on the 1 kilometre course – a slightly unclean start saw Chu-Hughes lose 2 seats to the bigger 99s crew but after a polished `Stride’ call was execute the crew moved passed into the lead of the heat and qualified for the A final as top seed with a time of 03:23.3.

The boys then had a 3 hour rest (spent watching the other races and convincing the Churchill NM1 4 to rerig their boat to include a bucket 20 minutes before boating)  and then were boating again. In the interim a noticeable tailwind had picked up on the course and the crew were keen to go out, clean up the start and claim the regatta victory.

The final started in a similar manner to the first, a cleaner start didn’t prevent the 99s crew taking a seat off the start but once more the Chu-Hughes crew pulled away from the rest of the field in the middle 500m of the race and despite a late surge from Bedford RC, Chu-Hughes finished a length in front of the second place – winning the regatta in a time of 03:20.2.

It was a hugely satisfying performance for the crew in pink and blue bandanas and a fitting climax to a hugely successful summer of rowing for the 4+, though there may yet be a couple of more on-Cam appearances for the crew before they disperse and a new year of collegiate rowing begins afresh. 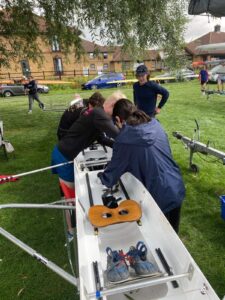 The (N)M1 4 took to a beautifully wide and clean lake for the last regatta of the season.

The time trial was our cleanest rowing yet, with a relaxed time placing us in the top 8 in the division.

The boldest coaching decision of the season was made as we decided to re-rig a mere 20 minutes before proceeding into the B final.

Somehow a bucket rig was created in record time with  Kieran Heal as stroke, sandwiching the two tiny-but-powerful bowsiders between the chunky-and-technically proficient strokesiders.

With a completely novel crew order, the Churchill bucket made a strong start and was a couple of seats up against Milton Keynes. After a gear change, we held neck and neck with the three other crews until approximately 900m, at which point two vicious crustaceans attacked the aforementioned stroke – NW1 style… We finished significantly quicker than the time trial, losing by a boat length, shaving 11 seconds off the time trial time. A brilliant end to the season with a great crew. 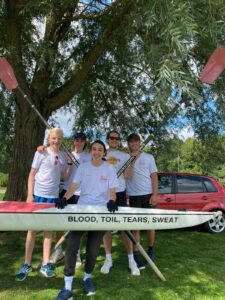 Peterborough was the last chance for David and I to win something in the pair.

The day started with us realising that my shoes lacked heel restraints (which is probably the reason why I had trouble taking them off that one time we capsized), and that we wouldn’t be allowed to race without these. I thought this was going to add to our reputation of ‘the guys who break the pair’, but we can’t have broken something that was never there in the first place! We promptly swapped my shoes, and got ready for our race.

It was a 1k course with no turns. There would be little to no steering involved, which was a relief for us. We started off the time trial strong. 500 metres in, a quick look to my left revealed to me that we were ahead of our three opponents. This was a new sight for David and I, and so we kept standing on our footplates, determined to win this race – which we did! Our final time of 3:36.0 allowed us to qualify to the first final of the Op 2- division.

The final was tense. While an incredibly fast Leeds pair pulled away from us straight from the start, the three other boats stayed neck and neck all throughout the race. So much so that after passing the finish line, we had no idea whether we had ranked second, third or fourth. We ended up ranking third, a mere 0.3 seconds behind second place!

We’re so happy and proud that we’ve made it this far in just over a month of training, in what’s arguably the hardest boat to row in! 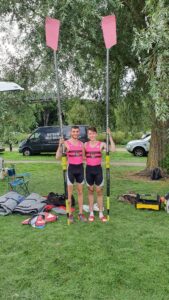