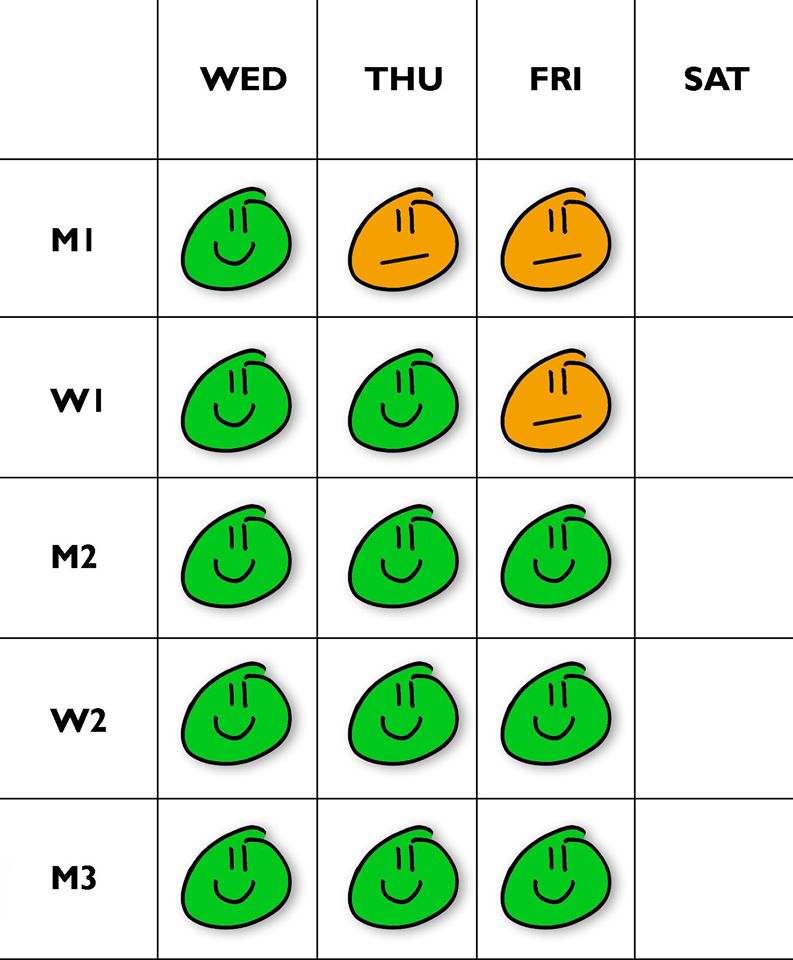 An interesting day all round or Churchill crews. A few rowovers meant for a few disappointed Churchill faces, but really that goes to highlight just how much Churchill’s fortunes have turned around even just over the 4 years I’ve been here (my first year we were pretty chuffed by only going down 3). However, Churchill are currently sitting second on the Pegasus cup table (behind Lucy Cav), and are aiming to reclaim the top spot on the final day. On the final day we have 3 crews (M2, W2, M3) chasing their blades. Also, yesterday saw a bit of drama in the M5 division, when Kings M3 were subsequently disqualified for subbing Alumni members into the crew, thereby awarding Churchill M3 a bump up on Kings.
In other bumps news, Pembroke, having bumped up 3 places, will be chasing Caius for the M1 Headship and their blades on the final day. Lower down, a phantom bump by FaT M1 on Downing meant they held up mid-race, subsequently getting bumped by Jesus. The top of the W1 division are much less eventful, the top 3 having stayed static for 3 days. Credit to Jesus W2, who become the first W2 crew to break into  the first division in a while, and they chase their blades tomorrow.

M1:
Chasing Emma M1, Chased by Magdalene M1
Result : Rowed Over
The gods of bumps are really not shining down on us this week, using up our fill of luck in blading in Lents! A fast start and some big pushes early after Motorway Bridge earnt us our first whistle in first post reach, we continued to eat into Emma in the corners and had overlap going into grassy. In truth we should have killed it off there. Marla, after expertly threading us through the gut in which crews had bumped out left, right and centre, was forced to go wide on grassy, with Emma just sneaking through ahead of us, losing us 1/2 length, some big pushes brought us back to within 1/4 length which we, frustratingly, held all the way to the finish. A solid rowover though, with us all absolutely shattered, taking 2 to 3 lengths out of a chasing Magdalene who gave up on the reach and again just disappointing to be in a mix of such inconsistent crews, but that’s bumps…. tomorrow brings another chance.
W1:
Chasing Pembroke W1, Chased by Peterhouse W1
Result : Rowed Over
W1 went out today knowing it was going to be a battle to hit Pembroke before they got Queens. We gained 1/4 length off the start but they held us there through the corners as they pushed into Queens, approaching Ditton we gained our 1st whistle but they already had 2 on Queens. As we came out of Ditton they gained their 3rd whistle, we did our final ultimate push in an attempt to get them before it was too late but unfortunately they finished off Queens with a final push and we rowed over. Tomorrow we send Queens to spoons.
M2:
Chasing Selwyn M2, Chased by FaT M3
Result : Bumped Selwyn M2
Day 3 has seen us chase Selwyn M2, and sharing a boathouse with them meant we knew they would be a challenging crew to bump. Despite having a sub in the boat we still had a strong row up, topping up our confidence that we could get them. A scrappy practice start opposite the Plough settled into a sustainable race pace as we rowed round Grassy.
Moving to the race itself, we unfortunately had a rather scrappy start again however after a fanastic lengthen we moved to a powerful cruising speed. While the first whistle took longer to come than in previous days, come it did. A couple of power 10s later we closed the gap considerably and Selwyn conceded the Bump on First Post corner.
Another fantastic row from the crew resulting in 3 out of 3 Bumps, and so tomorrow we’re chasing Robinson M2 for blades.
W2:
Chasing Queens’ W3, Chased by Jesus W4
Result : Bumped Queens’ M3
Today saw us with our messiest race.  As we were unable to collectively bring ourselves to a sustainable stride, the spirits after bumping were happy, yet a bit too exhausted considering how quickly we bumped.  Tomorrow is the last opportunity we have to prove to ourselves that we can have a race that is strong, calm and professional whilst chasing Clare W3 for Blades.

UPDATE: Since the report was written King M3 were disqualified for having alumni rowers subbing in for their M3 crew, thereby giving Churchill M3 a technical bump.
After a strong start but a wobbly settle, we held Kings III on station. A major wobble in the gut (2 crabs) meant a rather large loss in boat speed, but we were still confident we could make up the ground. Some big and powerful strokes along the Plough reach brought Kings back within station, but their power and determination gained them an overbump on a horrendously weak Jesus boat, who have been overbumped twice this week. After losing our battle with Kings (who had at least two, possibly three, ex M1 rowers parachuted in), we had an empty river to chase but we brought the boat home for a strong row over. Tomorrow will be a different story.
Posted in News.