For the second day of may bumps the rain continued, but the wind really picked up! Here’s how the Churchill crews faired in the stormy conditions:

“The race was as short as this sentence: Caius was fast.”.
David Berry, LBC and 6 seat

“No don’t drop out now, this is the best term to row! It will get you out of the library and think about all the sunshine you will get in bumps!” It echoed in my mind as I sat on my bike in 13 degrees and set off to the boat house in pouring rain. Perhaps this wasn’t exactly what we had in mind when we signed up this term, but it certainly was the challenge the Churchill Leopards thirsted.

After a tremendously successful start of our bumps campaign yesterday, we knew that today would be more arduous and that our endurance would be put to a test. M2 had kindly supplied us with cosy, hot-pink CCBC hats, keeping our heads perfectly warm as we set our course to the lock. The row-up to the lock was solid and stable, despite the fact that our blue bladed bow (who is actually a 2 seat) was unfortunately injured and had to be substituted for at the lock by our heroin Elizabeth. I mean, being eight rowers in a boat is great, but nine is clearly better.

Before we knew it the first canon fired, and we quickly made it to the boat. “2:15!” our bank party shouted as we sponged out the rain water. “…12! 11! 10! 9! 8! 7!​​GO!” and off we went with unexpected power, once again (in spite of Kathryn’s instructions) forgetting to stride. We had barely finished out power ten when the first whistle came, soon followed by the second. Could it be true? Was this once again a day of the big cats? Regrettably, the whistles and our (my) battle cries had instilled enough terror in Eddie’s W2 for them to turn the power on. Two whistles became one and eventually disappeared and with that our spirits sunk just a little bit.

The race ended with a comfortable row-over executed in good style, with some impressive lines by our skilled cox. The Leopards are now looking forward to a real challenge tomorrow, chasing Eddie’s W2 again and now being chased by a somewhat scary looking FaT W2. We clearly have the power required to catch what’s in front of us, we only need to keep calm and remember that a gear change is not too bad an idea with the longer run in mind. So tomorrow will be the day to show that it is the filling which gives a sandwich its real “Rawr”.

Here’s the situation: the bump on St. Catherine’s M3 (hereafter “Cats”) yesterday required a strong concerted effort for over a kilometre. We knew they were fast off the start and could easily take a length on us within the first 500. The boat we were chasing was St. Edmund’s M2 (hereafter “St. Ed’s”). They had been bumped the day before by a particularly fast Trinity Hall Crew. Cats were being chased by Downing who have been looking fast these past two days. If we could just hold off Cats, then Downing could take them out of the race, leaving us to focus on St. Ed’s. The stage is set. All that’s left is to, in the words of our cox, “dig deep, stay long, and don’t be frantic.”

The practice start near the Plough was superb — just what we needed. Our bank party gave the sort of measured praise characteristic of a coach: “Wow, that actually looked a lot better than I expected. I’m quite impressed.” Now, it was time for the race. 15, 14, 13, “Bow 4 take a stroke, bow pair take a stroke,” 8, 7, 6, “Blades in the water boys come on…” BOOM! With the cannon fire we were off. Strong draws followed by long strokes at high rate– we were flying down the river.

“Legs loose and … gear change … NOW!” We stayed at rate 40. But our cox persisted. “Gear change in 2. In 1. Now!” Finally we dropped the rate. A marvelous crab recovery kept the boat speed high after the start sequence. Suddenly, “POWER 10!” We could see we were pulling away from Cats, leaving them ripe for a bump from Downing. The early power 10 meant we were gaining on St. Ed’s. “Power 5 in 2. In 1. Now!” We started hearing the whistles and the adrenaline fired. The Churchill Lightweights were closing in.

Two whistles. Then three. “KILL KILL!” our cox yelled. A wave of excitement crashed over the boat, stroke seat pushed the rate up, and the power of the crew followed. Continuous whistles… “HOLD IT UP!” We had done it. In a matter of moments over the first 500 metres, we bumped St. Ed’s, priming us for the battle with Girton tomorrow. The Churchill Lightweights have bumped twice now and we’re looking forward to another day of racing. As an MPhil student, I only get to experience one year of Cambridge, but I think what I’ll remember most is rowing home with branches sticking out of my jacket, hearing cheers from the Plough Pub while a member of M1 dances in celebration for us. That’s Cambridge: greenery, friends, and celebrations for and with each other.

The first twist in our tale occurred in the small hours of the morning, our resident powerhouse Árpi tragically informing the crew that he had taken ill and would be unable to join us in our campaign for our first bump of the term. With the disappointment at our previous result still raw this was another significant blow to morale. Were M2 cursed?

The skies darkened once more and the rains poured down as the countdown to the race drew near. It appeared that perhaps we really were destined for another rough day!

Then out of the darkness came our first ray of hope, a super sub in the form of Peter emerged from the shadows, and we were back in business! Like that the omens started to turn, the skies miraculously cleared, Ali cranked up the playlist and our spirits rose. When we arrived at the boat we found even more good news, W2 had generously left us the gift of free speed in our footplates. We all adorned our new attire and now it was obvious, no more time for doubts, our fate is in our hands and the torpedo would not be denied for a second time!

Immediately as we began the row down to the start it was clear that today was different. We were more focused, more set and most importantly more rapid than the day before. Peterhouse M2 had been able to evade Jesus M3 until grassycorner, we were determined that they weren’t even making first post once we had them in our sights.

The cannons started sounding! 4 minutes, kit off, focus up, visualise the race, no more surprises! 1 minute, eyes in, clear the mind, stay loose, stay ready! Push off, come forward, square blades, then silence, the calm before the storm, we were ready!

We’re off and immediately it was as we thought, today would be different! Queens M3 might as well not have shown up, they were in the distance before the start sequence had even been completed and once again posed absolutely no threat to our unstoppable charge. The first whistle blew, we had already made up a third of the distance and were still gaining fast. The distance closed to almost nothing, we hadn’t even reached first post! Angela gave the kill call and it seemed impossible that we could lose it now!

Then, SABOTAGE, A CRAB, FROM OUR CAPTAIN OF ALL PEOPLE! Max had already raised suspicions when he “accidentally” brought his wallet to the race, now it was clear, Cracknell and his cronies had paid him off to save Peterhouse M2 more shame! Flying off his seat and almost taking Dom out in the process, was this it, would this cost us our bump? NO! Even with this calamity in the 11th hour they couldn’t stop the torpedo from hitting its target, within 3 strokes there was a noticeable thud and it was over, we had done it!

With two days left of bumps, now it is time to keep pushing forward. The torpedo will not stop with just the demolition of Peterhouse M2, no now our sights are set on a new challengein the form of LMBC M3, a familiar foe who we vanquished in Lents. There will no longer be doubts in the crew, no longer questions of can we do this or what might have been. Now we make our mark!

Unfortunately, M1 had an ultimately disappointing day as we rowed over twice: firstly to become sandwich boat but secondly to miss the chance to join division 1.

In div 2 we stayed alert as Girton came at us hard. They never got much inside a length before Tit Hall took them out of the race. After that we were free to wind it down and conserve some energy for our sandwich race.

At the bottom of div 1 we chased Wolfson and knew they were only aiming for the row over. We had plans to take chunks off their lead at various points along the course but they remained in control and responded to each of our pushes. We weren’t going to give up easily however and started red-lining halfway down the reach as Kieran called hammer after hammer to get us back on station. Under the railway bridge we threw down our final card and wound the rate back up to 45. Astoundingly, we suddenly closed on them and had 3 whistles on them as we ran out of road. Everyone in the boat collapsed with exhaustion but we had the bitter feeling that we had gone too late.

Tomorrow we face a stern test to row over at the top of div 2 again and earn our third chance to bump back into div 1. I have every confidence in this mega-fit crew that they can dig deep and get the job done this time.

6:10pm on the Cam. Surprisingly okay weather for W1 heading to station, a stable and well practiced row-up. The start at the Plough was shaky but still powerful. We reach station. Girton behind us, Clare in front.

A powerful start propels us through the cannon smoke. Managing to stride better than first day, going rate 39, Katie calls for a second stride and we settle to a steady 37. We’re gaining steadily. By the first corner Girton behind us are nowhere to be seen. One whistle.

A really good rhythm settles in after grassy corner, followed by a strong push from stern 4. We hear 2 whistles by the plough as the screams of the crowd pushed us on. Katie calls a push from all eight of us. And indeed we did push.

Clare are taking a very wide corner onto the reach. We are zooming towards them, and right before the corner, Katie calls the move: “KILL NOOOOWW!!” But wait. What was that sound? A crab? The bank? Of course not!! It’s Babette’s (bow seat) blade hitting Clare’s stern, their coxswain is forced to concede.

And just like that, after a strong row, excellent steering, and a powerful move, we held it up right at the top of the reach. A second bump for W1 who will be chasing St John’s (LMBC) W1 tomorrow, going for a third!

And in a pictorial summary: 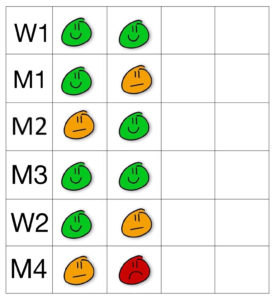