What a crazy end to the week! Churchill won the Marconi cup by a convincing margin (total of 40 points, an aggregate of +10 across Churchill’s 3 crews).

Every Churchill crew put in a convincing performance this week, which was reflective on the long hours training for every crew member this term. M1 finished off the week on a high achieving +5 blades – the first time a Churchill first boat has won their blades in a decade.

The women finished the week on +2, an incredible result, particularly given the number of new faces in the crew this year. M2 similarly finished the week on a high, bumping up on the final day to finish at +3 (unfortunately just missing out on their blades by crews quickly bumping out in front on the first day).

This has certainly been an incredible week for Churchill, and so we go into May term in a strong position, hoping to once again move Churchill up the charts back to where we belong.

I do hope all our alumni and supporters will consider joining us for May’s Boat Club Dinner which will this year be held on Saturday 13th June. 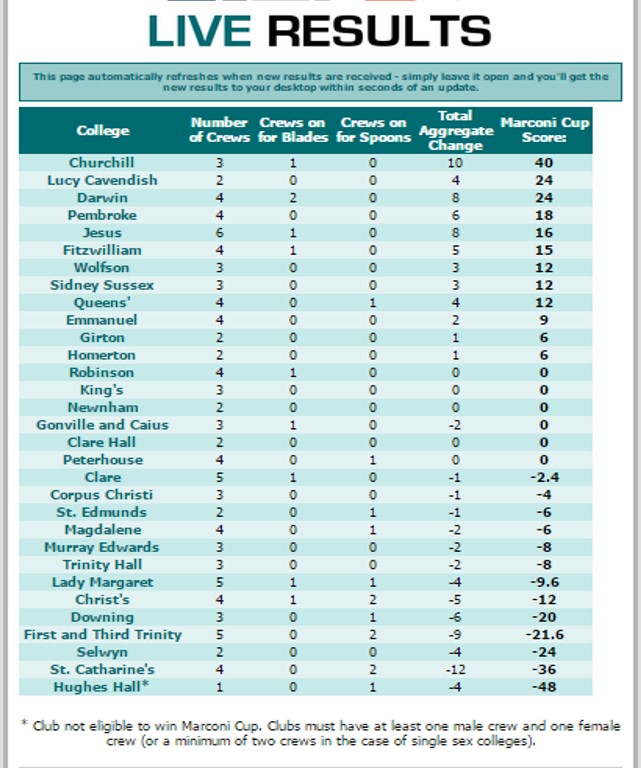 Race Reports for the final day are included below:

M1
Result: Bumped! (+5, blades!)
Chasing Emmanuel M1, chased by Trinity Hall M1
A slightly nervy row up as the sense of occasion go to us but a couple of quick starts to give us confidence going into the race. We knew it would be a tough race chasing Emma, a crew with a lot of experience and who had beaten us at Pembroke Regatta a couple of weeks earlier. A powerful, if scrappy start gave way to some great race pace through a massive gear change and we settled into what we expected to be a long bump. Gaining our first whistle past the motorway bridge we made a series of moves into them, relentlessly pushing into them for every whistle in the same devastating way we have moved through crews all week – the whole boat could sense how close we were to the bump (particularly Daniel at 2 as we had so much overlap he was staring straight at their cox…) giving it all we had and being rewarded with the bump on First post corner. Rowing home with the flag, some rather excellent rowing by Marla and coxing by Dan followed a quick dip in the Cam is one of my proudest moments with ncm38. Very, very proud of the whole crew for an almost faultless week, blading +5 back to Division 1!

W1
Result: Rowed over (+2 for the week)
Chasing Pembroke W1, chased by Peterhouse W1
W1 finished off an amazing bumps campaign with a solid row-over after Catz gave up before 1st post and a further 4 crews ahead bumped out, finishing with a 4 length lead over Peterhouse who had mistakenly thought they had a chance of revenge after the previous day. An overall great result of up 2 in the first division with very limited bumps experience! Bring on Mays!!

M2
Result: Bumped! (+3 for the week)
Chasing St Catherine’s M2, chased by Hughes Hall M1
M2 were going into the final day with a lot of confidence and intention to finish the already successful bumps campaign with the third and final bump. The start of the race wasn’t ideal, but as soon as we started gaining it was over for Catz M2. We caught up and bumped them on the grassy corner, right in front of the public. After we pulled in we were approached by Cam FM, and the stroke and the cox gave short live interviews “on the amazing bump”, midway through swapping the seats. Overall, +3 for M2, a very satisfying results. Looking forward to Mays!