Four crews were racing today, with both first boats, W2 and M3 in action. Here’s how they got on:

Were it not for bumps I’m fairly sure nobody would be insane enough to choose to row in the arctic conditions we did today. Waves reaching the top of the saxboards, winds blowing crews across the river, driving rain. Not that this deterred the infallible M3, with a composed row up (the wind doing most of the work admittedly) and the practice start one of our best so far.

Rowing to the start position and the spinning proved an interesting manoeuvre in the wind. Our bitter rivals Darwin were already in place, their crew run up to the lock and back a feeble attempt at intimidation. Heads in the boat, and desperately hoping for some rowing karma to work its magic, the gun. Clean start and powerful strokes, not a crab in site – we were a cheetah descending on its prey, and we were moving in for the kill.

And then round Grassy corner, the sight we had all been dreading – Darwin pulled up on the bank having bumped Magdalene. It wasn’t a proper bump though – Magdalene crashed out on the corner, there for the taking by Darwin. Not that this rather hollow victory at the lower end of the M4 division of Lent bumps stopped Darwin from cheering as if they’d just won the Olympics…

So another row over. But I am confident Saturday will be our day. Sadly, as much as we’d all like to, we won’t get another chance to bump Darwin, but hopefully Magdalene will, and the overbump will be ours. Having clung on to the prestigious position of footship for 3 days now, I think it’s time to step down and hand it over to another crew.

The third day in a row for the mightiest of woman’s crews (sorry W1 you don’t have a blue blade) – and what a chase!!
After rowing through what seemed like the North Sea with the backend of a hurricane moving through, we reached our post (after spinning the wrong way thanks to some fine coxing) and waited for the cannon….
BANG, as opposed to yesterday’s sad kazoo (the canons didn’t turn up in time), and we were off!!
Our revenge on Caius was not to be had, as their prey was too slow, but we set our sights on the over bump! Sadly 2K later, our many boat lengths of gainz were not to bring victory, but at least we left our chasers in the dust!
A well needed rest day is to follow for this hard working crew, followed by a second chance to get our rightful bump – Queens!

Saturday is going to be fast and dirty, and I for one cannot wait.
AMAZINGLY well done girls,
Oscar Berger, Cox

After another solid warm up which saw perhaps some of our fastest pieces to date thanks to the healthy tail wind, we all felt prepared to put yesterday’s disappointing decision behind us and show the rest of the river what we could do.

The wind however that had helped us so much on the warm up was of course now unhelpfully blowing in the other direction for the race. But we were unfazed by the gale force gusts, and in the words of Mila ‘we do good starts’ which gave us an early gain on Trinity Hall. Unfortunately, we were denied a triumphant revenge bump as Trinity Hall efficiently bumped Girton.

Our main concern however was the Catz boat which had begun to close us down. Nevertheless, although we had a brief run in with the bank early on where we lost a couple of strokes, the crew held it together. Despite Catz nearly achieving overlap, our many ‘kill’ calls proved to be effective, and as we began to pull away Catz were bumped by Caius before they could secure the bump on us. We then enjoyed (maybe apart from the tsunamis on the reach) a slightly lonely but well-deserved row over.

I am hugely proud of the crew today; everyone gave it their all, we refused to ever give up and Angela’s coxing was brilliant. Forward to tomorrow and getting our bump on Girton which we should have had yesterday!

After yesterday’s result we knew that we were chasing a much faster crew, and being chased by one much slower. Our expectation was that Magdalene ahead of us would bump up and we would be left chasing the over bump. In fact what happened – after a re-row of boats 10 to 16 (us=16) due to some carnage in the gut – was that the boats ahead of Magdalene bumped out early and we were left chasing Magdalene down on an empty river.

Unsurprisingly it was not to be, however the crew had another day of really sharp, strong rowing. The crew is certainly putting its best foot forward despite not quite having the luck of the draw around them. Now forward to tomorrow as we attempt to fend off Emma from our stern!

Here’s a summary in pictorial form: 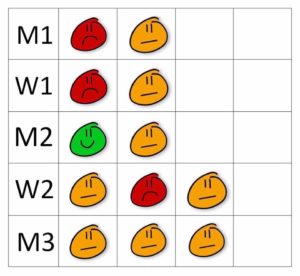