Last Friday was the Getting On Race. For the first time in a while we had both a W2 and a W3 racing! Unfortunately W3 did not get on to bumps, but their (in the words of ex-OC Tom Upton) ‘gutsy’ row was very impressive, earning them a 42s improvement on their time at Newnham Head. The race reports are below:

Bathed in the warm afternoon breeze, W3 pushed off for the Getting on Race. Although we have missed quite a few outings due to the raging storm last week, with all our effort to catch up, especially with our excellent performance in the hailing weather the day before, the crew was quite excited and confident about our challenge ahead. We seized the time before marshalling to perfect the rolling start. As Kieran, Charles, and our dear cox Alex pointed out our problems, the crew made quick adjustments. After spending a long time marshalling and waiting, we finally set off. From the draws, winds, to gear change, it all went smoothly. Occasionally, there were members rowing out-of-time, but it didn’t affect the overall rhythm. We could feel how each and every one of us put pressure down onto the footplates, and the boat was pretty well-set under the fast speed. It wasn’t a short race, but we managed to maintain at rate of 31 without a single crab throughout (hooray!). In the end, even though we didn’t get into the Lent Bumps, we improved by 42s from Newnham Head. As Tom said, “it might not be the most efficient, and it might not be the most beautiful, but it is definitely gutsy.” As we train more together as a crew in the future, our techniques, coordination, and power will undoubtedly improve to smash Talbot cup. 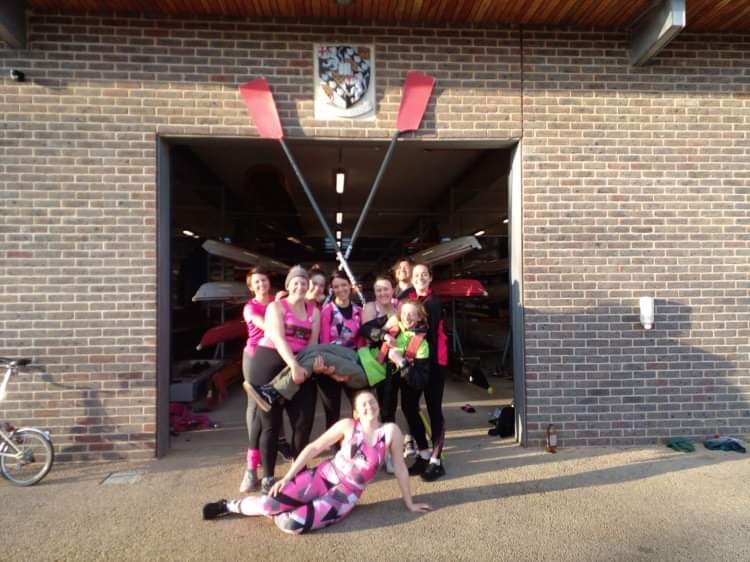 There were early mornings; there were 2ks; there was careful discussion of the race plan, including the possibility of multiple strides (if our enthusiasm got the better of us), lifts by stern-four out of the corners (to thank bow-four for their power steering) and power pairs down the reach. We were champing at the bit to set things right this year, after the bitter disappointment of Lent 2020 when W2 didn’t get on due to a rather unfortunate encounter with the bank. After all our preparation, we were ready.

Marshalling upstream of the reach was predictably chaotic and involved some close encounters with Kings, Magdelene and our own Churchill W3, but we were in high spirits and even shared our pre-race candy with the opposition. The eventual row up was fairly uneventful and being near the start of the division, we thankfully didn’t have long to wait at the lock – though there was time for George’s Traditional Pre-Race Stretching Routine before the start.

And then we were off – putting all our practice and technique to work! After a beautiful rolling start, we (eventually) settled into a fairly sustainable rhythm. The rest of the race was a blur of water, power calls and encouragement from the bank, and we made it to the finish line absolutely knackered – far more than for any other race this term, but with no regrets, since this was the only race with real stakes as far as we were concerned!

All the “digging deep” and “emptying the tank” paid off – W2 got on a good 26 seconds faster than the fastest boat that didn’t get on. After an excellent show on Friday, we can’t wait for Bumps to start this week.

Thanks to our subs who saved the day, Amy Hornsby and Katie-Lou White. Honorary mention to the majestic floof who kept us entertained during marshalling. And special thanks to bow-four who ended up doing all the lifts out of the corners despite our careful pre-race plan. 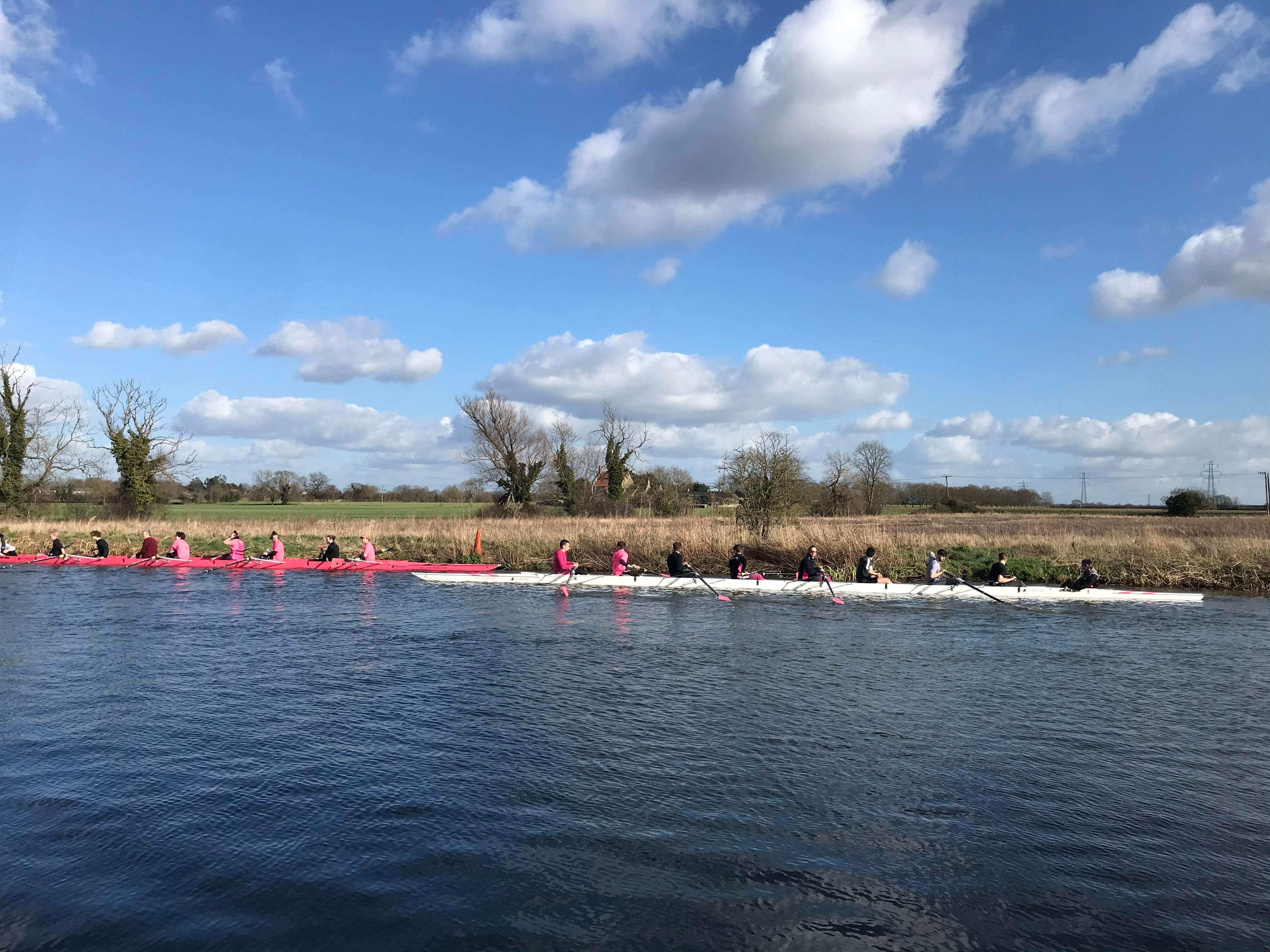 Today was the getting on race for bumps. Due to the sheer number of boats wanting to compete in lent bumps this year M2 had no choice but to take part in this race. The crew was almost unrecognisable, with 3(?) subs and the crew positions moved around,  Ben now in 7 seat to replace Charles (may he rest in peace, he has moved on to greater things, aka M1) and myself having to move to bowside just for this race since we had too many stroke side subs.  The only experience I have being a short outing the previous day and the roll up up to the marshalling area, I have to say I was not feeling confident about doing a 2k in my new position.

We arrived at the boathouse at an awkward 12.30, not quite enough time to have lunch before the race. It was not too cold with occasional rays of sunshine.  We put the boat on the trestles, did our usual checks, making sure the sliders were clean, making sure the riggers were tight enough etc. Ben, naturally being massive, did the bolt so tight on the bow riggers that the screw broke. Luckily the damage was easy to fix. We got onto the river and started cruising towards the starting point. I spent much of the journey down trying to get familiar with bow side rowing.

We got the marshalling area, and parked alongside the bank of the river, second in the queue. It must have been a pretty popular parking space since multiple boats had close contact with our boat, Vincent shouted ‘Bow side watch your blades’ every few minutes as successive boats tried to row past us and ultimately get caught in the wind, pushing the boats towards us. We didn’t wait for long until the race began.  The start was a little shaking as we desperately tried to prevent the boat from crashing into the bank. After many massive strokes from 2 (Conor) we were lined up and ready to go. 3 draws, 5 winds and 10 lengthens and the race had begun.

The race was fairly uneventful, no crazy moments, but no crazy power either and that was a problem that was seen by the bank before it was seen by the crew. The set of the boat felt good and the catches felt clean. As is tradition (two can play that game Sean), Sean (the splasher) hit me with a couple of large backsplashes completely soaking me, but by this point, I was not surprised (just disappointed). Besides I had bigger things to worry about, going rate 32 rowing on the wrong side of the boat, it was a recipe for disaster. Paradoxically though the high rate rowing actually felt easier than the steady state , perhaps this was because the boat was well set this time and so more forgiving of my bad form. I did however feel my left wrist cramp up since it was not used to feathering. Lucky I managed to hold on and had a clean race. As for everyone else in the crew, we all had fairly clean races with perhaps close crabs with Sean but nothing serious. We finished the race and we rowed back with misplaced confidence….

Once we got back the boathouse, we put the boat away,. Kieran rushed off the cheer on the womens’ boats that were racing after us and the rest of us gathered to get Nii djans assessment of the race. Nii Djan words were harsh but fair, it was clear that we didn’t put enough effort into this race, he gave us the reality check we needed. It seemed we got cocky after Sean’s race report, emphasising how massive we were. We had finished the race but none of us were tired, mine and Seans wrists were aching but we were all still standing and so had clearly not given it our all. Ni Djan told us if we did not put more effort in we would get smashed in bumps. We successfully made it onto bumps next week but it was close. We have been given a second chance and the crew now understands the effort we need to put in next week. 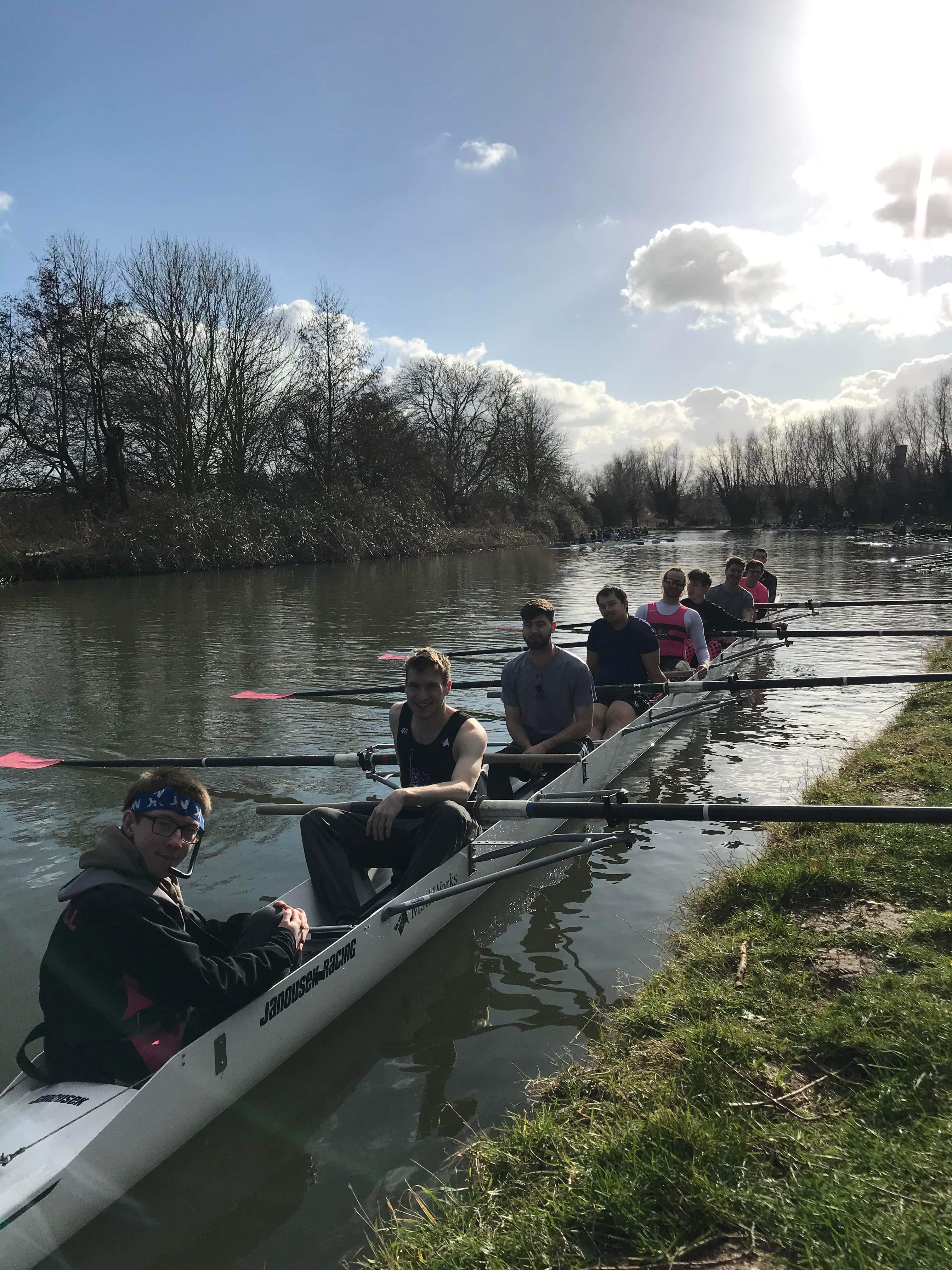 Two thirds of M3 plus some very kind subs turned up on Friday ready to try our best and hopeful – but not confident – about getting on. This was our first race since Newnham Head, and exactly the same course so we were just there to do better and show off the hard work the crew has put in this term. The vibes on the bank were immaculate, the sun was shining and we joined M2 in some boat maintenance and a group warm up. With everything in order our substitute cox David had us row off up towards the lock.

The row up was some of the best set we’ve had all term, and between that and the beautiful weather we were in high spirits and ready to put down some power. After some entertainingly sassy coxing and some (successful) attempts to splash our glorious leader the overall captain, we were parked up and overwhelmed with snacks as three different members of the crew/bank party offered contributions. At last, it was time to race. We took off in steady state and wound it up on the approach to the start line – we knew the stakes but to the crew’s credit the strokes felt relaxed as we brought it up to rate 34. After a power ten we settled down to 32 and watched the course fly past us on our road to victory. As always, the wind on the reach hit us hard but we kept it going and gave it everything – despite stern pair’s constant attempts to crab eventually resulting in a highly embarrassing overhead crab from yours truly.  Luckily no one noticed (???) and we jubilantly crossed the line knowing we had done our best.

Now for the real fun part: having rowed home, taken a wonky crew photo and thanked our subs profusely (shoutout to David Berry, Jack Salvesen and Connor Danes), we awaited the results to see if we had made the cut. Lo and behold, not only had we made it, but we had beaten M2 in the process. I’ll hold off from gloating (BCD here we come), but M3 deserves some praise. While I was only M2 captain for about an hour after a clerical error (quickly stamped out by Kieran, no doubt revenge for the splashing), I remain the proudest captain in the boat club. I’m seriously impressed with the commitment and the improvements the crew has made through the term, and excited for the week of bumps ahead.