After a month of no rowing, CCBC were back in action for their first official race since Lent Bumps. Four crews tackled the 1.8km course from Grassy corner to Top finish. Here’s how they got on:

We may have only had half our crew, but that didn’t stop W2 from facing Winter Head. Having managed to row in the snow, we were prepared for whatever the day may throw at us. However, it came as a bit of a shock to discover the bank under water! Having waded through we managed to find the edge and successfully made it into the boat without falling in. Phew!

After a solid row up, we made it to the start with plenty of time for some excellent last minute advice from Giorgio: ‘Try not to crab, that’ll help’. With this in mind we set off.

As we rowed down the reach, the W1 crews behind us started to gain ground. As we neared the railway bridge, the Homerton boat that had started 2 places behind went for the double overtake. However, they shouldn’t have underestimated our crew! We would not make it easy for them to overtake – Katie called for power and we delivered making it take considerably longer for them to pass us. Although unfortunately as they overtook they did hit our boat!

We were well past the railway bridge before Peterhouse W1 began to overtake. This meant that really we had won our game (to hold them until at least the bridge)! Again, we made it hard for them to go past and once again they knocked our boat as they went around!

As we were just coming up to the finish, a third crew decided to bump into us! Despite having our boat bashed, we remained unperturbed throughout the race! A great row for W2 and a fantastic way to end the term. 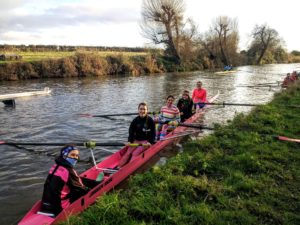 Waking up on the morning of the race to find a message asking for help to find an emergency M1 sub and a message from our coach fearing the race might be cancelled as the river had burst its banks set the mood for what was to be rather a hectic race. Fortunately, M1 found their sub and the cancellation was a false alarm so we were still on, even if our boat house was nearly underwater!

Arriving at the boat house, we quickly realised that the tales we had heard of the great Cambridge flood that morning were no exaggeration, with it being impossible to tell where the bank ended and the river began. With 4 pairs of intact wellies, and a lot of “original” thinking that questioned how we functioned on a daily basis, we managed to successfully get the crew into the boat and onto the river without incident or accidental dunking in the blistering time of 35 minutes. We pushed off.

The row up was uneventful, that is if you disregard the 2 massive crabs, one of which nearly flung our stroke out of our boat right at our marshalling post (rumour has it he just didn’t want to have to spin with the rest of us so thought he’d duck out early). Yet despite our best attempts at joining the various Cambridge swimming clubs that have featured on Rowbridge this term, the boat felt set, powerful and ready to go upon parking at the start of grassy corner. We were the head of the division; we would set the tone and leave the others in our wake.

While watching the seas of Santas and Rudolphs row past, with the odd collision thrown in for good measure, it was then that we first spotted our chasing crew for the day, Queen’s M1. Having originally been scheduled to row in the early division, they had decided to sneak into our division instead as they fancied a true challenge, to catch the mighty torpedo, a feat few had ever come close to in the past. But we were ready for their challenge, our cox even loudly announcing over the cox box just exactly what he thought of Queen’s chances.

Then suddenly it was time to race. A quick de-kit and words of encouragement shouted from the bank and we were off. We quickly settled into our rolling start and, right as our boat settled into its top gear, we heard the claxon sound to signal we had crossed the start-line. The race was on!

As we rowed down plough reach it all came together, no longer were we rowing as a crew with only one outing under its belt in the last month and featuring two subs, now we were rowing as one with our common goal of destroying this course. Our line through Ditton corner was perfection, poised between precision and disaster, and before we knew it we were onto the reach.

As our technique started to get more ragged and our crew started to tire it was then that our adversary decided to strike. Queens M1, raring their heads around the verge of Ditton, were a sharp reminder that we must not let up now. Down the entire length of the reach, being willed on by ever lounder screaming from our cox and power pairs in the boat, we maintained our distance to Queens M1 and by the time we passed under the railway bridge it was clear they weren’t going to get anywhere near to catching us.

With now just the final stretch of the race to go, it was all about finishing up strong. We kept the rowing clean and put down one final push to make it over the line and hear that glorious claxon again. We had done it!

Exhausted but elated, we paddled home to begin the chaotic process of getting out of the boat without capsizing. As the results were announced it became clear just how well we had come together, as we were the fastest college M2 on the day and even beat an M1 crew as well (sadly not Queen’s).

All in all, I feel the race was a huge success for M2. Despite the many barriers that we had faced to rowing this term, we were still able to put out a crew and row at a highly competitive level which we should all be very proud of. If this is how the torpedo races when it is unable to properly train then the river had better be ready for what we can do next term! 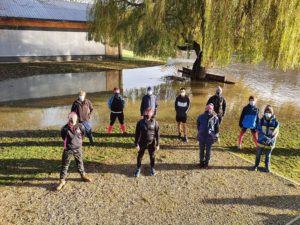 Despite organizing two substitute rowers in as many days, M1 were eager to hit the water for Christmas Head. Although the lockdown prevented training for the better part of 5 weeks, the Chunkies could rely on their training from October to get the boat moving nicely. The warm-up row went remarkably well given the circumstances, with only a few pausing drills needed to get the crew back in sync.

M1 set off as the third boat in Division 1, chasing down Chesterton. The race was a proper gut check after such a long hiatus, but the oars moved well and the boat sped along the course. Hei Li took a great line around Ditton Corner before calling for some additional power. The chasing boat from behind was nowhere to be seen as M1 closed in on Chesterton over the course of the Reach. As the Chunkies cleared the Railway Bridge, the crew gave everything that they had to finish off the term. Upon crossing the line, Chesterton were within a length and the Chunkies celebrated mightily. The Chunkies were cheated of victory by Queens M1 in a later division, but the crew was happy to be the 2nd Academic 8+ and the 4th Men’s 8+ in the overall event.

The crew would like to thank all of their coaches and substitute rowers who helped out during this chaotic term. While unusual, this term was still a great opportunity for M1 to work on improving while having good fun. The Chunkies are looking forward to getting back on the water during Lents for a hopefully more normal term. 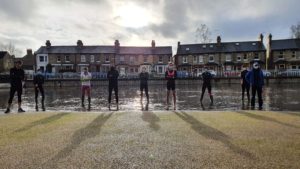 The day before the race preparations for the race began in the snow, with our first outing in the 8 in over a month. A frozen Katie Kirk braved the snow to coach us through some practice race starts and everything felt really good considering our lack of outings.

The day of the race began with photos of a very flooded hard at the boat house, and no sign of where the bank ended and the river began. Wellies were critical, and after checking our riggers and footplates we managed to get the boat into the water without getting too wet. We all got in and Kathryn our stroke skilfully helped push us off, European standing style. The stream was very strong so we flew down the river, with a beautiful practice rolling start down the reach. Marshalling was interesting with no bank party, but we just about managed. The conditions were perfect and before we knew it, we were off! Our start, although not as tidy as it was in practice, was aggressive but relaxed and we settled into a strong rhythm. In no time we were on the reach and rolled through some power pairs down the straight, rowing against the stream. Although we slowed slightly in the middle of the race, this was not unexpected due to the lack of training, and we managed to maintain the rate and stay together as we lengthened the gap between us and Queens W1. We crossed the finish line and rowed home in high spirits.

Later that afternoon we found out we had won, beating Jesus W1 by 13 seconds! This was an amazing result from a race that everyone in the crew really truly enjoyed and had worked hard for both when rowing at the start of term, and off the water in the second half of term. A special thank you to David Sampson and Katie Kirk for coaching us this term and helping us improve so much. It is great to be back on the river and we can’t wait for next term – hopefully we will be able to continue painting the river pink and keeping up the reputation of CCBC! 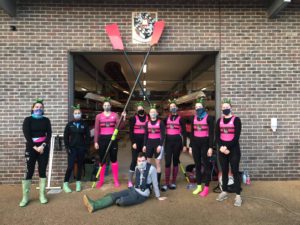