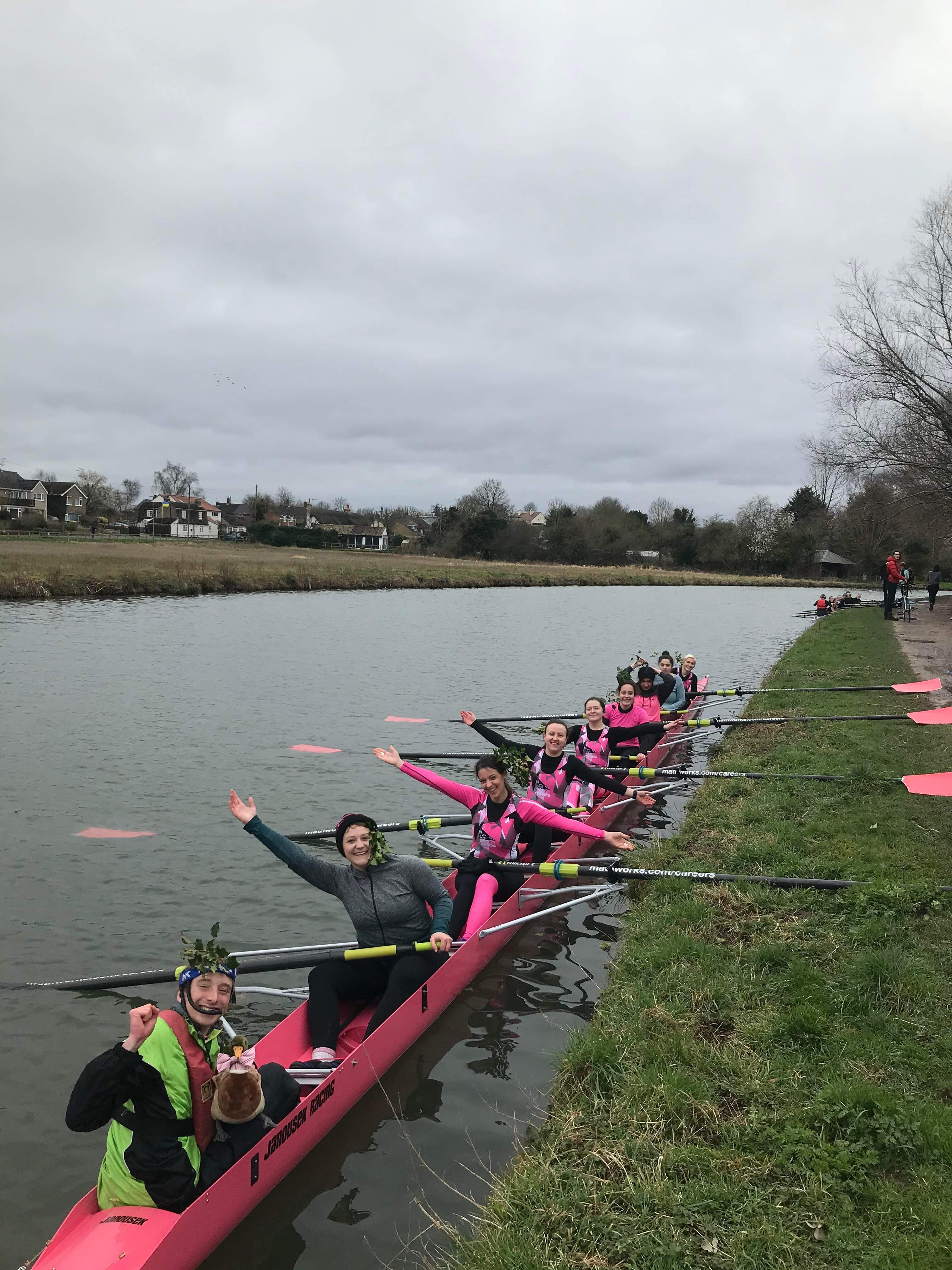 Today, after 4 years, the Cam saw the return of Churchill’s W2 at bumps (for many of us this was our first bumps race!). We did a quick erg warm-up, walked through our race plan, had our usual pre-race chat/pep-talk from Kathryn and pushed off. We rowed down to the lock, eyeing our competition and practiced our ‘kill’ call on the reach (at which point Tom shouted something at us – I’m sure it was to tell us how great we were rowing and not a reminder to square early!).

Having arrived at our starting position, we performed our traditional YMCA stretch to stay warm and keep the nerves away. As we listened to the cannons fire for the men’s half of the division, we settled into the boat and gathered our strength for the gruelling 1.8km that faced us.

Despite a slightly scrappy start, we quickly regrouped due to George’s fantastic calls and settled into a comfortable(ish) 32. Only a minute and a half later, we heard the first whistle from Kathryn letting us know that we were gaining on Lucy Cav’s W2. Despite our increasing excitement, we kept calm and our rowing stayed clean and smooth. As we kept up the pressure on them, the whistle blew twice and not too long after, three times. At this point, we performed our ‘kill’ call and were steadily gaining on the crew in front of us. They soon conceded and George safely steered us towards the bank before we celebrated (having only rowed about 500m), accompanied by Kathryn and Tom’s cheers. We decided to bask in our victory with a mini photoshoot: despite the branches in our hair, the real star was the duck toy that Tom had brought along.

We rowed back to the boathouse, feeling confident and energised after our success – enough so that when Kathryn and Tom spotted a dog on the path ahead of us, we set our sights on catching up to it. We put down some power and even considered another ‘kill’ call, but thankfully our opponent conceded and we were able to row alongside the dog for a while, ending our day on a high.

Overall, we had a great race and hopefully we will continue to smash it (metaphorically of course!) over the next couple of days! Yeah W2!

Back on our first M1 outings in Michaelmas, we were already thinking about Lent Bumps. Many outings later – and frankly with a very different crew – we were coming to front stops in front of Maggie II. While Chris, Jun and I had been hard at work preparing for this moment for five months, it was Jon and Daniel’s chance to redeem themselves from the eight row overs they went through two years ago. It was also an opportunity for our novices Zoe and Thomas to prove their worth, as well as for Peter and Charles to help us show everyone that Churchill M1 can in fact row well. As the division 1-2 sandwich boat, today our goal was simple: hold off Maggie.

Our start was fast. But Maggie wouldn’t let us escape so easily. They were going hard on their footplates and were slowly gaining on us. They eventually came into overlap. With Zoe’s continuous calls for power, we kept pushing and kept them from hitting Chris’ rigger. But Maggie was still dangerously close, maintaining their overlap. Our determination didn’t fail, and we didn’t let the situation fluster us. We knew we would be able to push them away as they looked like they were about to collapse. But before they did, the overlap turned into a bump.

While disappointed, we have learned a lot from today. We believe that we can come back on Thursday cleaner and faster, as we chase the sandwich boat. Whether it’s Maggie II or Emma I, we are looking forwards to this new chance to prove Tom Upton wrong on his Bumpit prediction.

The day got off to a rocky start, the loss of Charles to M1 continuing to burn in the boat leading to another brand new never seen before line-up and the bumps carnage started even earlier with one of the crew testing positive for Covid (sadly still causing major issues for the club) leading Ben (M2 Captain) and I to spend most of our morning hunting for ‘a body’ we could put in the boat. Happily, we could convince Sam Turner to come out of a very very long retirement and so before we even got to the boat house we were already incredibly lucky to be able to go out on the river.

A mix of nerves and excitement, alongside some nice practice starts, took us down to the start right next to our trusty friend the cannon. Only two of the main crew had rowed a bumps race before today so the experience itself was something to take in, but Tom and Nii Djan kept us focused as the timer went down.

Our first bumps race was underway, a bit flustered and scrappy we made our way down first post reach with the noise and whistles around us. Trying to push away from Clare Hall as we pushed in to Christ’s, entering first post corner, however the all too familiar noise of the sirens ending the division started and we had to await our fate as the crews two ahead appeared to have given up on making any active attempt to clear the river.

We made our way back down to the start line… at least all of us had now done a bumps race before. This time we knew we had to go harder off the start as we knew Clare Hall would try and make a push into us. For the second time we were underway, Clare Hall were coming for us with everything they had as we ploughed on trying to hold our ground. As we entered into first post corner Clare Hall began to lose some of the ground they’d made against us and a sandwich quickly formed as Tit Hall from behind gained ground on them. We knew we had to hold on, a powerful push out of First Post sealed the deal for Clare Hall as they were taken by Tit Hall. Sadly, as every in bumps, although we may have already had to fight hard it was not over yet. Clare Hall and Tit Hall had clearly taken better lessons in clearing than Christs and we could see Fitz beginning to make their way around the corner as we pushed into the gut. Cheered on by our M3 and W2 support party around Grassy I knew this was going to be a long hard race. I’m reliably informed at this point that M3 thought given Fitz’s speed and size they’d have us on the Reach. M2 however are not made of quitters. A cat and dog fight began between us and Fitz as we kept pushing to prevent them gaining ground, every landmark was a relief as we were closer to the finish and we hadn’t been caught yet. A power move on the Reach gained us some ground back but we knew they’d keep making moves of their own. We worked hard holding off Fitz’s first whistle until the Railway Bridge. Knowing there was still a lot of river left to go. I have to admit I did hope at the P&E Fitz would forget they could chase us all the way to Green Dragon… sadly I was wrong. We kept fighting hard until the end, sadly Fitz had more in them at the end than we could muster and they managed to take us 20 strokes from the finish line.

Obviously being overbumped doesn’t feel great but we didn’t just give it to them, and made them fight for every meter that they had to get. Bumps never has been a fair race, and the circumstances we’ve had the last few weeks for M2 haven’t been particularly great. However, today shows – contrary to what some may have believed after the GoR – lack of spirit isn’t the issue. With a 1:53 over more than 2.7km we didn’t just make it easy for them. As a Captain and their Stroke I’m still proud of what we achieved today, even if my legs really hurt. Tomorrow’s a new day, and we go again, damn I better rest up my legs…

After doing well at the Getting on Race, we optimistically took up our spot as the sandwich boat in the head of Lent Bumps M4 Division. We didn’t fully anticipate how quickly four minutes can go by after the first cannon – after getting to front stops only in the last few seconds, we were off!

We had a good start, managing to hold off Selwyn M2 approaching First Post Corner. However as we went around the corner, we lost a little power. Selwyn M2 took that opportunity to then bump us at The Gut.

For all but two of us, this was our first bumps race. While we didn’t get to row over, we’re proud of the rowing we did, and are looking forward to the rest of the week.