On Saturday 11th May 2019 M1 and W1 competed in Bedford Amateur Regatta, a 1.2km course through the centre of Bedford. Here’s how they got on:
M1:

M1’s first race of the day at Bedford Regatta was against Abingdon School’s J15 1st VIII in the open 8s category. We knew it was likely to be a tough race for us, going up against a school with real rowing pedigree and multiple professional coaches per year group. We expected their crew were likely to be technically superior to us, but hoped that all of our hard training and expected size advantage would pay off and over the course we would come out on top. Unfortunately that wasn’t to be. We started on the inside station, which meant we started half a length behind but with the bend in our favour. We didn’t get our cleanest start and as the race went on we failed to reel them in, never quite hitting a real race rhythm and eventually succumbing by about a length. Losing to a schoolboy crew was a tough loss to take, but we picked ourselves up knowing that we had another race coming up later in the day.

Our second race was against Christ Church Oxford in the college 8s category. This race was expected to be even tougher than the last (with Christ Church regarded as one of Oxford’s fastest colleges), but we had some confidence going into the race after we set a faster time that them at Head of the River earlier in the year. This time our pre-race focus was better and we began the race on the outside station with our fastest start of the year. We managed to hit a nice race rhythm early on and with the boat really moving, but all the time Christ Church were gaining despite our best efforts to hold them off. Once the race reached their bend they made their advantage count and pulled out ahead. We did our best to stay in touch, eventually losing by a couple of lengths. While their power was too much for us, we were happy to have raced a better race – setting a time several seconds faster than in our first race of the day, and we hope to continue that improvement as we build towards bumps.

Going in to our first race against Emma, we weren’t expecting much. Last year we lost to them in the second round by just over a length, and so, with a new (less experienced) crew this race would be a good comparison between us and last years’ Churchill W1 (who went up 3 in Mays).

With the bend in our favour on the enclosure side, we were the further back of the 2 crews on the staggered start. However, only 10 strokes in to our start sequence we were gaining and gaining fast. By the end of the start sequence we were level and moving ahead. At the halfway mark we emerged from the darkness of Bedford’s town bridge to find we were three quarters of a boat length up and underrating the other crew. With some reminders to breathe, we had this race in the bag and held our rhythm to finish. Despite a sprint to the line from Emma, we won the race with over half a boat length lead and a shocked M1 on the bank.

This surprising win meant we were through to the final of the Women’s College 8’s and up against Jesus W1, a crew which had placed in the top 12 University crews in the intermediate W8+ at BUCS just a week earlier and was currently head of the river for Mays. However, like M1, Jesus W1 had entered two separate categories at Bedford Regatta and after winning their other category, they were starting to get tired.

For this race we instead had the embankment side and as we lined up we were nervous, but ready to see how we compared to such a good crew. After a wobbly first few strokes, Jesus had managed to move up a seat. As we started to wind up the rate we got into our rhythm and stayed in our zone until the town bridge, just before the half way point. Yet again as we emerged from the town bridge onto the straight section of the course, we were in the lead by half a length. From here to the finish it certainly wasn’t pretty rowing, but it was definitely powerful. The crew gave it their all every single stroke to keep our lead on Jesus for the win, and despite a sprint to the line from Jesus pushing us all the way, we fought them off for the win. While the verdict was given as half a length, it certainly felt a lot narrower.

And so we return to Cambridge after the first regatta experience for half the crew, complete with pots and ready to take on the rest of the term. 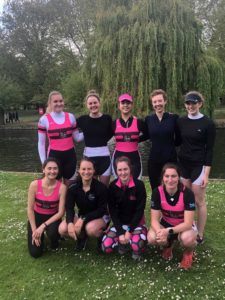 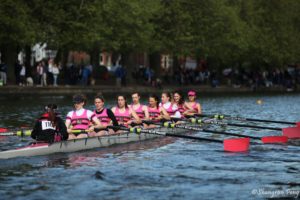